Voting against your own interest? Nonsense!

It’s an allegation commonly heard in the political realm. It frequently comes from the left, but our liberal friends don’t own its copyright. Conservatives have been known to use it when it suits their needs. And why not? It’s the perfect opportunity to accuse the other side of not only tainting the electoral process but foolishly harming themselves in the process.

“You’re voting against your own interests!”

But it’s an idea almost as pointless as the democratic process itself. And I’ll give you three reasons why. Today we start with this one:

“Voting against ones own interest” suggests a naive belief in political rhetoric.

Senator A: I am in favor of X! And if elected I will support a bill that makes X the law of the land!

Connie: Well, that does it! I’m not voting for that jerk!

Libby: What’s the matter with you, dummy? You’re voting against your own interests. Don’t you understand that you need X?

Here’s a news flash for Libby or anyone else who shares her credulity where the political process is concerned: politicians lie. And while lying is generally frowned upon in the beltway, it is by no means a guaranteed ticket to the unemployment office.Sometimes politicians get caught in a whopper and have problems; other times fibs slip though the cracks with hardly anyone noticing. Politicians know this and will happily take their chances with mistruths.

But even if Senator A is being truthful about his undying support of whatever it is that Libby thinks Connie can’t do without, there’s also this reality: the political landscape is littered with examples of policies that simply didn’t achieve the results their backers had hoped. If you need examples, we could start with education reform and move on to tax reform and by the time we get to banking regulation, you will have very likely grasped my point.

Ah, but what happens when the political candidate is truthful and the policy really does create the change it was intended to? That’s when the real mess begins. We’ll deal with that tomorrow… 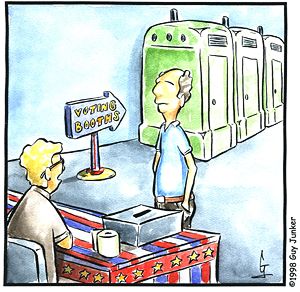