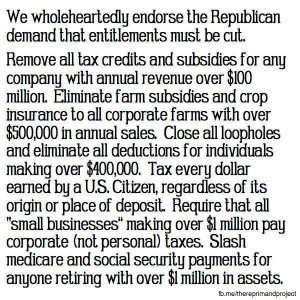 I suppose I share an observation about Facebook with Richard Roeper of the Chicago Sun-Times and the Roe and Roeper show on WLS-AM.  It has become a blur of JPEGs that my friends find cute, or interesting, or something.  Usually is is cute, until the occasional uber-leftoid slaps something like the image to your left up.

Somehow, finding a Leftoid who gives a hoot about fairness is impossible.  Seriously impossible.

All of the measures in the weak stab at intellectuality would work fine if all of those dollar amounts were eliminated.  Somehow they cannot conceive a world where everybody pays a low percentage on whatever they make, no matter how much they make.  Or, just have a sales tax and everything sold has a low tax percentage tacked onto the price.  Easey peasey.

Nope, when any sort of Leftist “thought” comes into play, punishment must be included.  Look again at the screed, they cannot stand any American doing well, the whole thing is the more you make, the more they want to screw you.

And taxing deposits?  These leeches just cannot stand anybody saving a nickel for a rainy day or to pass on to their friends, spouses, and offspring, can they?  If they are so darn concerned about that, why are they all in a twist about Mrs. Windsor and the DOMA case?  She is trying to get the lower “married” tax rate on the inheritance of a very highly valued business and the business alone exceeds all of the dollar amounts listed above by a long way.

Of course, the typical libertarian favors a single tax rate, no matter who the government says you are allowed to have sex with.

They really do think that they are different from Republicans.  They are funny that way.

Steve is a graduate of the University of Tennessee, Finance.  He is a 30 year veteran Aviation Officer of the Army National Guard and Army Reserve, and former Defense Contractor in Resource Management.  He has always had a libertarian streak, no matter which major Party flag he flew. Today he is a Minarchist leaning to Anarcho-Capitalism. He and his wife reside in a secret, undisclosed, subterranean lair with the clan motto of “Leave us alone and nobody gets hurt.” The Anarchist’s Soufflé  Book is Steve’s current work in progress, coming soon any year now.  Follow Steve @AustrianAnarchy and view his Austrian Anarchy blog.