[This article was originally posted on Reformed Libertarian] 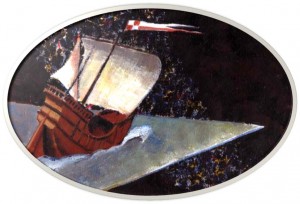 They certainly are. Just not in the sense, though, that a lot of readers might imagine. Let me explain.

What is it that typically keeps people from embracing free-market capitalism as a system of exchange? Or how about libertarianism in general?

The initial stumbling blocks today, of course, are the prevalent myths about it:

(1) In the past, without government keeping everything in check, corporations were free to run amok and they exploited everyone just in order to make a quick buck.

(2) There was rampant economic inequality in the past.

(3) It was only because of progress that society has finally started to become more free and equal.

Such a widespread tendency to reject the free market with little or no critical thought is similar to how many today still write off the people of the Middle Ages who lived prior to Columbus’s voyage. Supposedly, most of them were staunch “flat-earthers.” You were probably even taught that yourself in elementary school.

In reality, an abundance of research over the years has proven that virtually no one – not even the Catholic Church – believed in anything other than a spherical earth. In 1945, a pamphlet by the Historical Association of London listed the misconception over this matter as one of the 20 most common errors in history. Even evolutionary biologist Stephen Jay Gould notes that “there never was a period of ‘flat earth darkness’ among scholars … Greek knowledge of sphericity never faded, and all major medieval scholars accepted the earth’s roundness as an established fact of cosmology.”

Jeffrey Burton Russell, Professor of History at the University of California in Santa Barbara, provides perhaps the most concise history of that myth’s development in his work Inventing the Flat Earth. In the final chapter, he writes:

“Educated medieval opinion was virtually unanimous that the earth was round, and there is no way whatever that Columbus’s voyages even claimed to demonstrate the fact. The idea that ‘Columbus showed that the world was round’ is an invention … During the nineteenth century it became increasingly common to opt for scientific realism or positivism and to tolerate theology only insofar as it abandoned its proper epistemology in favor of a scientific basis … Christian epistemology was identified with an outmoded, obsolete, medieval worldview, and because that worldview is so foreign to the modern, progressivist worldview, it was misunderstood as superstition. Thus it came to seem natural, obvious, certain, that medieval people were so superstitious that they must have believed in something as foolish as the flat earth. The few actual medieval flat-earthers were belabored to confirm the prejudice, and the bulk of the evidence on the other side was ignored” (70-71).

Consider the parallel between this myth of a dark age of flat-earth belief and that of capitalism’s supposedly dark history. Why does the free market so frequently fail to capture an interest on the public’s part in understanding its true nature? I would argue, with Mises, that it stems from the perception of capitalism as being against progressivism, which by its very name props itself up as the only system that can encourage and finally bring about progress:

“The fundamental dogma of this creed [progressivism] declares that poverty is an outcome of iniquitous social institutions. The original sin that deprived mankind of the blissful life in the Garden of Eden was the establishment of private property and enterprise. Capitalism serves only the selfish interests of rugged exploiters. It dooms the masses of righteous men to progressing impoverishment and degradation. What is needed to make all people prosperous is the taming of the greedy exploiters by the great god called State. The “service” motive must be substituted for the “profit” motive. Fortunately, they say, no intrigues and no brutality on the part of the infernal “economic royalists” can quell the reform movement. The coming of an age of central planning is inevitable. Then there will be plenty and abundance for all. Those eager to accelerate this great transformation call themselves progressives precisely because they pretend that they are working for the realization of what is both desirable and in accordance with the inexorable laws of historical evolution. They disparage as reactionaries all those who are committed to the vain effort of stopping what they call progress.

From the point of view of these dogmas the progressives advocate certain policies which, as they pretend, could alleviate immediately the lot of the suffering masses.” – Ludwig von Mises in The Anti-Capitalistic Mentality, 59.

In his book, Russell similarly notes that “[t]he hope that we are making progress toward a goal … leads us to undervalue the past in order to convince ourselves of the superiority of the present” (76). He has the myth of this widespread medieval belief in a flat earth in mind, but I would argue that his observation can also be applied to the widespread resistance toward capitalism that we see in our day. Progressives always diminish the past and elevate the present in order to maintain a sense of ever-increasing advancement.

Just as many are still “so convinced that the medieval world must have been ignorant enough to think the world flat,” even in the face of complete and irrefutable evidence to the contrary, people will also cling to a belief in the backwardness and cruelty and rejection of human progress that uninhibited capitalism must have wrought in the past. Entrepreneurs in the 19th century, of course, were robber barons. They were outright thieves. We’ve progressed since then, so now we should do all we can to hold those thieves accountable by limiting their ability to work with one another, by taxing their profits as much as possible, etc.

And so on. Appropriately enough, many will even come right out and compare us libertarians and free-market advocates to flat-earthers! Irony of ironies.

“Thus,” concludes Russell, “our worldview is based more upon what we think happened that what really happened.”

What Russell sees in the fiction of past flat-earth belief is a certain “shared body of ‘myth’” which “can overwhelm reason and evidence.” Going even further, I see it also in the economic and historical revisionism of political progressives.