As you read this, a potentially catastrophic weather event is developing down in Florida.

But last night, while over the eastern Gulf of Mexico, Michael quickly intensified into a Cat 4 hurricane.

As of this morning, Michael is on track to be the most powerful hurricane to ever hit the panhandle — threatening winds of 145 mph, surges of rapidly rising ocean water and flooding rain.

The sudden shift in intensity has sent meteorologists and emergency services into a panic: 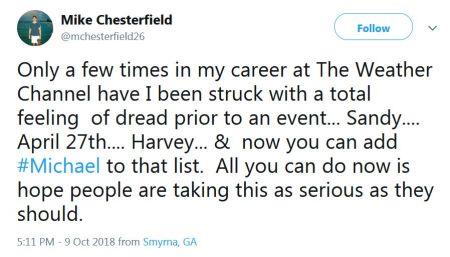 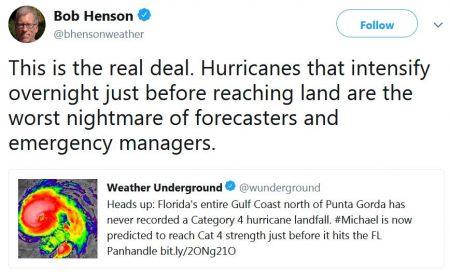 Experts warn that the Florida Panhandle, from Pensacola to Apalachicola, and the Big Bend area will be hit the hardest.

This morning, the National Weather Service warned of “widespread power outages, downed trees blocking access to roads and endangering individuals, structural damage to homes and businesses, isolated flash flooding and the potential for a few tornadoes.”

By the time anyone realized just how dangerous this hurricane was going to be, it was already too late to evacuate.

“The time for evacuating along the coast has come and gone,” said Florida Gov. Rick Scott on Wednesday morning.

“First responders will not be able to come out in the middle of the storm. If you chose to stay in an evacuation zone, you must SEEK REFUGE IMMEDIATELY.”

So folks are stuck where they are right now. But is there anything they could do right now to increase their chances of survival?

10 Tips to Safely Weather the Storm

From here, we’ll have to wait and see how this disaster develops.

If you’re in Florida, stay safe and use the tips above if you’re stuck in your home.

P.S. This will probably get buried under the news of the Hurricane Michael. But if you need a strategy for pulling $3,000 out of the stock market every month, check out this clever little trick. James Altucher has used it to make millions of the years. And if you click here before midnight this Sunday, he’ll show you how you can use it for yourself.