The “Progressive” Crown Prince of Murder

Publications like the financial news outlet Money International say Salman is just the man to “drag Saudi Arabia kicking and screaming into the 21st century.” And given a cursory glance at his reputation, you might be inclined to agree with these frothy commenters.

When Salman assumed the role of Crown Prince last year, the 33-year old vowed to purge the Saudi government of corruption (to “drain the swamp,” as it were). By November of that year, Salman’s anti-corruption squads had arrested 40 Saudi princes and government ministers on charges of corruption and money laundering.

As an advocate for woman’s rights, Salman lifted Saudi Arabia’s long-standing ban on women drivers. He reopened the movie theaters, which had been outlawed in the Kingdom for 32 years. And in 2017, he won TIME’s Person of the Year reader poll, beating out the editor’s choice (the women of the #MeToo movement) by 18%.

As a tribute to the people’s choice, TIME slapped an extreme close-up of the Crown Prince’s giant face on the front of this year’s April Issue. 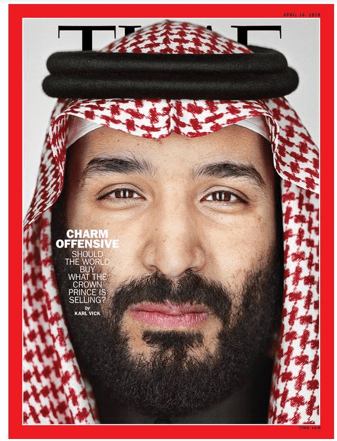 Yep. You’ve probably heard all about the “diplomatic incident” in Istanbul by now.

On October 2, a 15-man kill squad lured a Washington Post journalist to the Saudi consulate in Turkey, murdered him, chopped up the body, and rolled the pieces up in a lavish embassy carpet.

What followed was just about the laziest attempt to cover up an international assassination plot the world has ever seen.

A crack team of secret assassins, these boys were not.

Maybe they thought their plan was foolproof. Maybe they simply hoped no one would notice the disappearance of one Saudi journalist. Or maybe, just maybe, they’re just used to assassinating folks on their home turf and getting away with it scot-free.

Scratch beneath the surface of the Crown Prince’s shiny exterior and you’ll find a history of politically motivated arrests… suspicious deaths… and allegations of a deadly kill squad assembled by the prince himself.

This presents the world’s nations with a problematic decision. Do they halt trade and place sanctions on the Saudi Arabia? Or do they ignore the blatant assassination of a U.S. resident on foreign soil and continue to suck up to The Kingdom for their oil?

Only time will tell.

In today’s issue of Money & Crisis, Jim Rickards details how Saudi Arabia will likely retaliate against such sanctions… and explores how their plan could devalue the U.S. dollar and tank our entire economy.

P.S. After 15 years of secrecy, Jim is finally able to reveal this sensitive information on camera. It has everything to do with a powerful tool he developed while working with the U.S. government… that can predict surprising political and economic events before they happen. Click here for Jim’s shocking confession.

The Petrodollar Era Is Coming to a Close

Many readers will be familiar with the original petrodollar deal the U.S. made with Saudi Arabia.

It was set up by Henry Kissinger and Saudi princes in 1974 to prop up the U.S. dollar. At the time, confidence in the dollar was on shaky ground because President Nixon had ended gold convertibility of dollars in 1971.

Saudi Arabia was receiving dollars for their oil shipments, but they could no longer convert the dollars to gold at a guaranteed price directly with the U.S. Treasury. So, the Saudis started secretly dumping dollars and buying gold on the London market. This was putting pressure on the bullion banks receiving the dollar.

Confidence in the dollar began to crack.

Henry Kissinger and Treasury Secretary William Simon worked out a plan. If the Saudis would price oil in dollars, U.S. banks would hold the dollar deposits for the Saudis.

These dollars would be “recycled” to developing economy borrowers, who in turn would buy manufactured goods from the U.S. and Europe. This would help the global economy and help the U.S. maintain price stability.

The Saudis would get more customers and a stable dollar, and the U.S. would force the world to accept dollars because everyone would need the dollars to buy oil.

Behind this “deal” was a not so subtle threat to invade Saudi Arabia and take the oil by force. I personally discussed these invasion plans in the White House with Kissinger’s deputy, Helmut Sonnenfeldt, at the time. The petrodollar plan worked brilliantly and the invasion never happened.

The World Turns Its Back on the Dollar

Now, 44 years later, the wheels are coming off. The dollar still constitutes almost 100% of global oil transactions. But the world is rapidly losing its appetite for the dollar.

Today, Saudi Arabia is China’s second-largest source of oil, exceeded only by Russia. Saudi Arabia could easily price oil in yuan, then swap the yuan for Swiss francs or the IMF’s special drawing rights (SDRs), and use the proceeds to add to its reserves or buy gold.

Saudi Arabia could also price oil in SDRs or gold and hold those assets or swap them for other hard currencies to diversify away from dollars.

The possibilities are numerous. The conversion of oil prices away from dollars to some alternative is just a matter of time.

The deal has several parts, which all together spells dollar doom.

The first part is that China buys oil from Russia and Iran in exchange for yuan.

The yuan is not a major reserve currency, so it’s not an especially attractive asset for Russia or Iran to hold. China solves that problem by offering to convert yuan into gold on a spot basis on the Shanghai Gold Exchange.

This straight-through processing of oil-to-yuan-to-gold eliminates the role of the dollar.

Russia was the first country to agree to accept yuan. But Venezuela has also priced oil in yuan instead of dollars. The rest of the BRICS nations (Brazil, India and South Africa) have endorsed China’s plan.

How to Prepare for the Coming Crisis

This marks the beginning of the end of the petrodollar system that Henry Kissinger worked out with Saudi Arabia in 1974, after Nixon abandoned gold. The dollar is being pushed out of international trade and payments will be replaced by yuan, rubles, euros or gold.

The decline of the dollar as a reserve currency started in 2000 with the advent of the euro and accelerated in 2010 with the beginning of a new currency war. That decline is now being amplified by China’s emergence as a major creditor and gold power. Saudi Arabia weaning itself off the dollar will likely be a major factor.

But leading reserve currencies do not necessarily die overnight. The process can persist over many years, so the dollar will not be abandoned tomorrow. There will be no single announcement or crucial event, just a long, slow process of marginalization.

For example, the U.S. dollar replaced the UK pound sterling as the leading reserve currency in the 20th century. That process was completed at the Bretton Woods conference in 1944, but it began thirty years earlier in 1914 at the outbreak of World War I.

Inflation ran rampant once the sterling lost its reserve status.

Prices increased by 200% in the first 185 years while the sterling was the lead reserve currency, but went up 5,000% in the 70 years that followed.

The key takeaway here is, once the sterling lost its lead reserve currency role to the dollar, inflation exploded.

Price stability seems to be the norm for money with reserve currency status, but once that status is lost, inflation is dominant.

What does that mean for you?

If history is a guide, inflation in U.S. dollar prices will come next.

That’s a function of collapse of confidence in central bank money, which is already being seen. It’s happened three times before, in 1914, 1939 and 1971. Let us not forget that in 1977, the United States issued treasury bonds denominated in Swiss francs, because no other country wanted dollars.

What’s going to happen this time?

We don’t know for sure. But eventually a tipping point will be reached where the dollar collapse suddenly accelerates as happened to sterling in 1931.

In his 1925 poem The Hollow Men, T. S. Eliot writes: “This is the way the world ends/ Not with a bang but a whimper.” Those waiting for a sudden, spontaneous collapse of the dollar may be missing out on the dollar’s less dramatic, but equally important, slow, steady decline.

The dollar collapse has already begun. The time to acquire inflation insurance is now. Investors should acquire gold and other hard assets before that happens.

It contains sensitive information that I’ve only just revealed. I can’t reveal everything, for national security reasons. But I say as much as I can legally say. And everything’s true, I promise.

To date, the CIA has given clearance to fewer than 100 people in the entire world involved with this project.

I happen to be one of them!

Now, this short clip has NOT been sanctioned by the United States Intelligence Community.

But what I reveal has implications far beyond national security. As a tax-paying American citizen, you deserve to know the truth.

The post The “Progressive” Crown Prince of Murder appeared first on Laissez Faire.