A Crash Course in Crypto Crashes

Bitcoin is having a hell of a week.

Last Wednesday, the king of crypto crashed below the long-held $6,000 support level.

User confidence took a hit, triggering a large-scale sell off. And this morning, crypto geeks watched in horror as the dollar value plummeted past $4,400 to a 13-month low.

Folks are asking the question: Is this the beginning of the end of crypto?

Will investors be having $20 bitcoin with their Christmas dinner?

Is this just another bear market for crypto to bounce back from?

Or as a colleague of mine put it to me this morning:

“What the F**k is Going on with Bitcoin?”

We don’t talk about crypto too much here.

It’s not that bitcoin and it’s crypto offspring have no place in a crisis plan. As we saw in Venezuela recently, crypto can be extremely useful when your government starts to take liberties with your wealth. 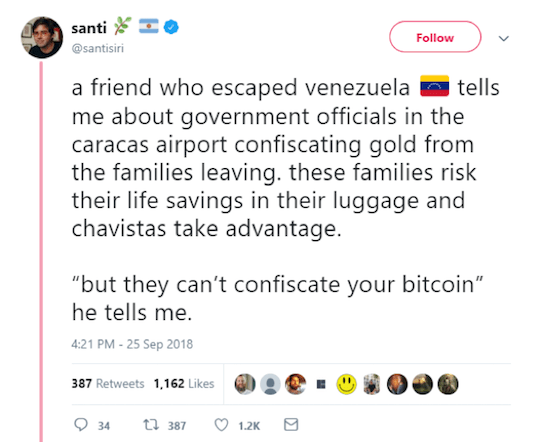 But even though it’s proven useful in certain situations, it is hard to recommend as a long-term store of wealth.

For one, this is very much new territory for everyone involved. Folks forget that bitcoin didn’t even exist 10 years ago. So its longevity and security are still very much up in the air.

Sure. It may very well be the decentralized, digital currency of the future. Or the whole thing might get hacked, destroyed by government regulation, or just fall apart in the next few years.

More than anything else, bitcoin is hard to recommend as a store of wealth because it’s so volatile. This time last year bitcoin was on a bull run that launched it to almost $20,000…

There’s definitely a whole lot of money to be made on speculation… but as a hedge against crisis it doesn’t have the same security as owning physical gold.

Full disclosure: I own some crypto. But the money that I used to buy coins is totally separate from my savings, emergency fund, and more traditional investments.

The way I see it, it’s no skin off my nose if bitcoin tanks because my financial security is safe regardless. But because the future is so uncertain, it’s exciting to have some money along for the ride.

With all that said… what the heck is going on with bitcoin right now?

Obviously, I’m no expert. But I knew some of you would want to know the real story. So I reached out to some crypto experts I’ve worked with before, to help cut through the bull and give you just the facts.

Apparently, there are two major factors which triggered the crash.

A “fork” is when one cryptocurrency breaks into two separate cryptocurrencies, usually because of different views on the technology underlining the coin.

Typically, one fork will upgrade its tech, while the other will vote to maintain as is. This spilt has the unfortunate side effect of doubling the number of coins, which reminds the market that crypto coins are not as “finite” as they claim to be.

Want more coins? We can make more via a fork.

Bitcoin cash is already a fork of the original bitcoin. And now it is splitting again. All these bitcoin clones make investors nervous. Hence, the rapid-fire selloff we saw last week.

Last year’s Bull Run dragged the concept of cryptocurrency into the global spotlight. What was once an obscure digital currency for anonymous buying and selling now had the attention of mainstream investors, big banks… and the government.

Last Friday, the SEC declared civil penalties against two crypto companies that failed to register their coin offerings as securities. Meanwhile, the Justice Department has launched an investigation into claims of manipulation in the crypto markets.

All this serves to undermine confidence in all cryptocurrencies, not just bitcoin. But one of my sources, crypto expert Kamal Ravikant, says this is far from the nail in the coffin some folks seem to think it is:

Makes you want to sell and run, right?

This is how investing works in every market ― whether it’s pork bellies, real estate, stocks, or crypto. That is the fundamental principle of investing.

Many people forget that double-digit price movements are common in crypto. In fact, it’s more common than not. Crypto bear markets have always recovered.

Those that stick around and buy the best assets cheap will be called “lucky” in a few years.

P.S. Tired of all the uncertainty and volatility? Check out this powerful income-building strategy to yank $3,000 out of the stock market every month. Click here for a step-by-step guide to using this strategy. But don’t delay. You only have until midnight Sunday to take him up on his offer.

The post A Crash Course in Crypto Crashes appeared first on Laissez Faire.