The settlement paid out $200 million to a disgruntled group of the ridesharing apps own drivers. (You always sue the ones you love.)

$200 million ain’t no chump change. But the settlement was much lower than the plaintiffs had hoped for.

How much are they taking home? After five years of legal fees, each plaintiff walks away with little more than $2,000 each. I believe the legal term for this type of settlement is “Womp, Womp.”

The plaintiffs were originally seeking to redefine Uber drivers as employees, instead of contractors. This would have forced Uber to restructure its business model and start paying for driver’s gas and business expenses.

Shannon Liss-Rorden, the lawyer behind the suit, is pursuing multiple cases against gig-economy companies that “misclassify workers as independent contractors, in order to save on labor costs and shift the risks and expenses of operating a business to their low-wage workers.”

“We continue to have cases pending against Amazon, GrubHub, Lyft, DoorDash, Postmates, Handy, and many others that are exploiting their workers through this business model,” said Liss-Rorden.

This is good news for Uber’s upcoming IPO and the wealthy Silicon Valley elite who are already invested in the company. But it means very little to the regular investors who can invest pre-IPO.

Former hedge-fund manager James Altucher says the system is rigged but there are still ways for folks like you and me to play the IPO game:

If you’re a regular investor — someone who isn’t a millionaire or a Silicon Valley insider — you legally CANNOT invest in most startups before they go public.

The government has this bizarre rule called Rule 501 of Regulation D, which won’t let you invest in startups unless you’re worth at least $1 million… or unless your income has been $200,000 or more for two years.

Supposedly, the government created this rule to “protect” individual investors who are deemed too vulnerable to invest in the volatile startup market.

But in reality, all it’s done is make sure that only the rich can bank the biggest gains.

That’s why I look for the trends and find the backdoors.

Click here to check out the pre-IPO backdoor James dug up for this opportunity and get in on the ground floor of a brand-new $15-trillion industry.

Yesterday, the charges were unveiled in the biggest college-admissions scandal in U.S. History. (The second biggest scandal being how those Nerds started their own fraternity).

Between 2011 and 2019, members of Hollywood’s wealthy elite paid William “Rick” Singer $25 million to get their dumb kids into the best schools in the country.

Rick achieved this through a series of bribes, falsifying documents, and some good old-fashioned Photoshop.

For an envelope full of cash, Rick had sports coaches falsify the students’ records so they looked like model athletes. Then he’d have the student’s face Photoshopped onto a more athletic kid’s body. And that was all it took.

In court yesterday, prosecutors read from one of the incriminating emails (and boy howdy does it not look good for old Rick):

[C]ould you please create a soccer profile asap for this girl who will be a midfielder and attending Yale so she has to be very good. Needs to play Academy and no high school soccer, put down you or Ali [Khosroshanin, former head coach of women’s soccer at USC] as coaches for Academy FC Newport etc … awards and honors — more info to come — need a soccer pic probably Asian girl.”

The biggest payout on the list was from a parent who paid $1.2 million to get her teenager into Yale. (Man, that kid must have been a massive ding dong.)

But in a dramatic twist, Desperate Housewives actress Felicity Huffman and Lori Loughlin of Full House fame were both named as part of the Department of Justice’s investigation.

Huffman was arrested by the FBI with guns drawn yesterday morning (I guess they’re not a fan of her work). She’s charged with paying $15,000 so her daughter could retake the entrance exams privately.

Don’t worry Shameless fans: Loughlin’s husband, character actor William H. Macy, was not charged. Hey, maybe he can play himself in the Lifetime movie of the college-admissions scandal!

Loughlin is charged with paying $500,000 to have her two daughters’ student records falsified. It’s an absolute bargain considering Loughlin will get some hands-on research for her Orange is the New Black audition, courtesy of the U.S. Justice Department.

(If it’s anything like their Wi-Fi installation, expect the launch to be a few days late and anytime between 9 a.m. and the end of time itself.)

In the Big Book of Predictions 2019, our tech trends expert James Altucher said, “the first company that gets 5G to market will reap the benefits for years.”

But keep in mind this is not a full market rollout. This service will only be available to folks living in certain designated areas of Chicago and Minneapolis. (Sorry, everywhere else.)

And it will only be available on phones capable of receiving 5G internet. Which don’t exist right now.

In order to get a product to market on time for the launch, Motorola has announced a bulky 5G mod that will snap onto the back of the Moto Z smartphone. 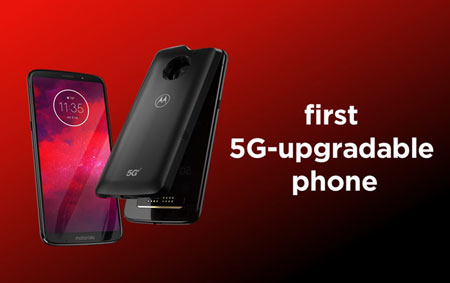 Obviously, these are early days yet. But technology moves at an eye-watering clip in 2019. Mark my words, this is the year how we use the internet changes forever.

In fact, one of America’s legendary tech forecasters just predicted an April 24 event that’s set to shake up the whole system. It could be a massive blow to the three major internet companies… and give you a chance to turn a single paycheck into $110,661.

Click here to find out what you need to bank these life-changing gains.

A unicorn is just a pretty name for a privately held startup company valued at over $1 billion.

They’re called unicorns because they’re so rare… at least they used to be. The occurrence of unicorns has gone up more than 350% in the last few years.

If you launched a company today (let’s say an app that rates pictures of dogs wearing hats), your startup has a 1.28% chance of becoming a unicorn.

A decacorn, on the other hand, is a horse of a rarer breed. This is a startup valued at over $10 billion. And when these guys go to IPO, it’s a big deal.

Fuel for your nightmare: In mythology and on the walls of teenage girl’s bedrooms, a unicorn is a horse with one horn in the center of its forehead. A decacorn would be a ten-horned monster horse.

The Rise of the Decacorns

In 2019, we could have more decacorns going to IPO than any year before.

It’s a veritable stampede of ten-horned monster horses valued at more than $10 billion.

We already know about rivals Lyft and Uber’s upcoming IPOs (and we’ve already found a backdoor investment that stands to make you serious bank when it happens).

There are three other decacorns who haven’t officially announced anything yet. But if you ask me they are saddling up for a ride to IPO.

Airbnb just made a classic “we are going to IPO move” when they poached Amazon’s Dave Stephenson.

Typically, companies will hire a big-time Chief Financial Officer shortly before going to IPO. The idea is to have an experienced hand on deck to guide the transition and instill confidence in the investors.

Full disclosure: Airbnb and I have beef. My parents rent out my old room on Airbnb so my wife and I have no place to stay when I visit for the holidays.

Palantir is Peter Thiel’s ultra-secretive software company. And because I like not being sued, I have zero jokes to make about that.

According to a report by the Wall Street Journal, Palantir has talked with both Morgan Stanley and Credit Suisse about going public in 2019. The deal could go down as early as the first half of the year.

An October 2015 funding round valued the company at $20 billion.

They’re taking the Hobbits to Palo Alto: Palantir is named for the spooky crystal ball that Saruman uses to spy on Gandalf in The Lord of the Rings. Way to name your spooky information company after the bad guys, Peter.

I don’t know. I never understood it. But people seem to like it and that’s what’s important. According to a report by CNBC, Pinterest is aiming for a mid-2019 IPO.

After a June 17 round of funding, the company was valued at $12.3 billion.

Anybody who is invested in one of these five companies will make a lot of money when they go IPO. But unfortunately, regular investors like you and I can’t invest pre IPO.

That’s why we look for backdoor plays. A backdoor play is simply a publicity-traded company that will profit directly or indirectly from the success of these otherwise inaccessible unicorns and decacorns…

We’ve already found the backdoor to the Lyft and Uber IPOs. (Click here now to discover how to find out how to profit from one of the biggest IPOs in history.)

Click here to send us your comments and tell us what you think. Do you agree with us? Do you think our ideas are stupid? Bring it on. We can take it.

In today’s issue, I’m going to take a step back and let y’all fight amongst yourselves. A lot of readers had some strong feelings about Trump’s proposal to slash farmer subsidies. So we might as well air them out and get it out the way.

Take it away, folks.

I am a farmer. Cut the subsidies. The payouts go mostly to agribusiness and small or medium size farms.

Free market capitalism is the epitome of randomness and chaos theory combined. How do we keep cronyism out of it by making collusion transparent? Not all collusion is bad. Quis Custodiet Ipsos Custodes?

(Editor’s note: This is an extract from a longer email). Yes, farm subsidies are too generous. They need to be lowered. Better yet, let the farmers do what they have always done — raise their crops and feed America.

The business about funding FARMERS to grow GMO crops is CRIMINAL!!!! The GLYPHOSATE (Round-up) is DEADLY!!!! GMO goods/foods, which I do not consider good nor food, are destroying the BIO-GENOME and making our people and soil deathly ill… slowly but surely… thus feeding BIG PHARMA, another CRIMINAL stuck in our nation!!!!!

How about we do right by SUBSIDIZING our ORGANIC FARMERS to produce ABUNDANTLY — more abundantly than with GMO — so that we can have healthy food.