WikiLeaks founder charged on behalf of U.S. authorities under an extradition warrant

WikiLeaks founder Julian Assange was arrested in London this morning, just moments after he was ejected from the Ecuadorian embassy (for being annoying).

Assange, who has been holed up in the embassy for almost seven years, was arrested in the middle of an awkward attempt to grow a big old wizard beard. 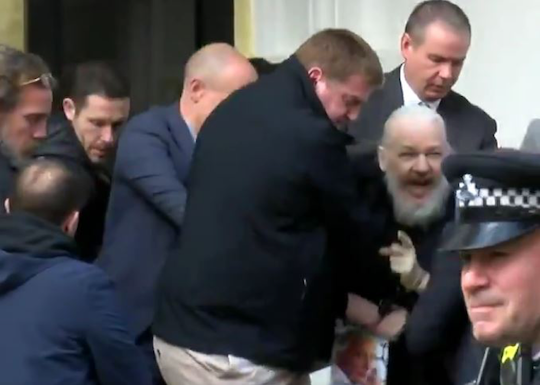 Leaked still from Amazon’s upcoming Lord of the Rings reboot.

Assange fled to the embassy in 2012 to duck two charges of sexual assault in Sweden. Those charges were later dropped. But he still had an outstanding warrant on his head for skipping bail.

The Metropolitan police arrested Assange this morning on that relatively minor charge. But back at the police station Assange was “further arrested” on behalf of U.S. authorities under an extradition warrant. (British police are out here arresting arrested people.)

We all live in the Ecuadorian embassy: The charge is what is called a “submarine charge.” It’s filed when a target goes into hiding, lies in wait, and “resurfaces” when the target reemerges.

Assange is charged with two counts relating to classified information given to WikiLeaks by Chelsea Manning:

a) To knowingly obtain classified information.

b) And to intentionally access a computer without authorization. (Gasp)

Journalists are allowed to publish classified information under the First Amendment’s free speech. But Assange is being charged with “actively encouraging” Manning to leak information. 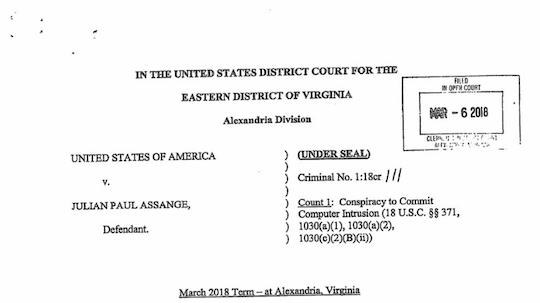 The indictment was filed in Virginia in March of last year. Which would have been surprising if the documents hadn’t been leaked back then because of a filing error. (Who needs WikiLeaks when you’ve got crappy bureaucrats?)

Rumors started circulating last week that the Ecuadorians were planning on booting Assange’s butt out the door for acting like a jackass. But Ecuadorian officials rejected the claim.

In a press conference on the steps of the embassy last Thursday, Ecuadorian ambassador Jaime Marchán said: “There is no change in the Señor Julian Assange’s situation. To say we are going to take him out the embassy is an offense to Ecuador.”

And yet here we are one week later.

So what did Señor Julian Assange do to sour his relationship with the Ecuadorians? Walked around with his bathrobe open? Didn’t use a coaster?

Allegedly Assange has grown accustomed to the taste of biting the hand that feeds him. Over the course of his stay, he:

We should be seeing our old friend Assange stateside sometime soon. Expect the folks in Washington to roll out the full three-ring circus for this one.

Until then, what’s your take on the Assange and WikiLeaks’ “hacktivism”?

Are these guys the fighters for truth and justice they claim to be? Info terrorists? Russian stooges?

Click here to email me and leak me your thoughts and we’ll chat about in the Readers Comments section tomorrow.

Amazon is Listening to Your Private Conversations

You know, we make a lot of jokes about Amazon secretly listening to everything you say to your Alexa speakers.

Heck, I made six or seven of these exact jokes in yesterday’s issue alone. (Some better than others, admittedly.)

Well, the joke’s over.

Because Amazon is actually listening to you.

Alexa’s “cloud computing” is just a bunch of guys

According to a report by Bloomberg, Amazon has recruited thousands of “human helpers” to listen to and review your conversations with your Alexa.

There are real people tuning in to the private conversations you’re having in your own home. (And your private requests to play that one Taylor Swift song over and over again.)

Amazon’s marketing would lead you to believe that Alexa is always getting smarter by being “in the cloud.” But what they failed to mention is that there are thousands of guys and gals up there in the cloud helping her out with her homework.

The goal of this highly secretive project is to improve Alexa’s understanding of speech. Recordings are transcribed by hand and fed back into Alexa’s software to correct errors.

And it’s going down in secret facilities all over the world, from Boston to Costa Rica, India and Romania.

The evil of inaction

The existence of Project Creep-On-Customers was leaked to Bloomberg by former workers at one of the facilities.

Amazon forced these folks to sign nondisclosure agreements barring them from speaking publicly about the program (because it’s a creepy program). But they chose to break the NDA after a series of disturbing incidents.

Occasionally the listeners pick up things Echo owners likely would rather stay private: a woman singing badly off key in the shower, say, or a child screaming for help.

Sometimes they hear recordings they find upsetting, or possibly criminal. Two of the workers said they picked up what they believe was a sexual assault.

Amazon claims it has procedures in place for when workers hear something distressing. But two employees told Bloomberg that, after requesting help, they were told it wasn’t Amazon’s job to interfere.

If we’re going to split hairs, it wasn’t Amazon’s job to be listening at all. But as long as they were they might have let someone know they were sitting on potential evidence of a crime.

Amazon made the usual non-committal “We take your privacy very seriously” statement. Amazon’s (NASDAQ: AMZN) stock was down slightly in the midday trading but largely unaffected by the news.

Do you own an Alexa or voice-activated speaker? Do you see this as a necessary trade-off to improve the tech or is this story cause for legitimate worry?

Click here to tell us what you think. (Bonus points if you dictate it to your Alexa.)

Too Many Dems Spoil the Election Soup

With 18 confirmed candidates (and a possible seven more to come) Democrat voters are spoiled for choice this voting season.

Which is great if you like a little variety in your life. But bad if you actually want to win an election.

According to behavioral scientists (those are the ones that ring bells to make dogs hungry), people like some choice. But too many options will cause a “choice overload,” that will result in no one winning.

Say you start off with a choice in cereals — Warren-Os or Franken Burny.

But when you open the box it turns out you’re all out of Franken Burnies. You’re a little disappointed but you say what the heck, Warren-Os will do.

Now imagine a situation where you have a choice of 20 cereals… 19 of which are empty. And you go down the line opening every box in order of preference until you get to the last one.

At that point, you’re so fed up you decide to just skip breakfast entirely.

Simply put, too many options will only lower voter satisfaction with the eventual candidate. This leads to lower enthusiasm and voter turnout.

As a behavioral scientist writing for Politico points out, we saw this exact effect in action during the Chicago Mayoral election. A crowded field of 14 candidates resulted in the lowest turnout in city history at just 33.4%.

In the end, it could be the Dems’ over-eagerness that hands Trump his reelection.

The landscape of the American workplace is changing.

More and more, work is moving away from fussy little cubicles and onto the couches and into the home offices of the self-employed. (As I write this, I am in my slippers struggling to get the dog off my lap.)

According to the most recent study by Freelancers Union, 56.7 million Americans were freelancing in 2018 — up from 3.7 million in the last five years. And it’s not hard to see why.

Working for yourself speaks to something quintessentially American.

There’s no boss to tell what to do (sorry, Doug). No naysayers to hold you back. Just you and your unbridled potential to succeed.

You are, to quote Napoleon Hill, “the master of your destiny.”

I find the rise in the self-employed, freelancers, independent workers (whatever you like to call them) unsurprising.

Advances in tech have made working from home easier than ever before. It only makes sense that those who wanted a more independent life would leverage that.

But what surprises me is the number of people who desperately want to be self-employed, for whatever reason, haven’t taken that step.

According to FreshBooks’ third annual self-employment report, 24 million Americans (more than the population of Florida) want to become self-employed by 2021, but simply don’t know how.

“Tens of millions of Americans have told us that their ‘dream job’ is to work for themselves,” said Mike McDerment, co-founder and CEO at FreshBooks. “But this is a scary proposition for most because the world is in many ways not ready for them. The good news is that the payoffs — both financial and otherwise — are real.”

Those payoffs he mentioned?

According to the study:

And while 63% of self-employed Americans believe money is less important than quality of life, 55% say they’re earning more working for themselves.

So what’s going on with those 24 million Americans who want to be self-employed but aren’t?

Well, it’s the oldest story in the book. The same reason the majority of folks won’t ever write a book. Or build that extension. Or fulfill whatever dream they’ve been holding in their heart all their life.

They don’t know where to start.

If you’re one of those 24 million Americans and want to know exactly where to start, I recommend checking out the Side Hustle Bible.

This quick and easy-to-read guide to amassing multiple streams of wealth is essential for anyone who wants to strike out on their own and start making money now.

With a little guidance, starting a new source of income doesn’t require any special connections… overwhelming time commitments… and in some cases, it doesn’t even require up-front cash to get started.

Anyone of the 177 income ideas in Side Hustle Bible can make you a simple, relatively risk-free income starting as soon as tomorrow.

Click here to claim your free copy and take charge of your life today.