The Government Wants the Keys to Your iPhone

Facebook and Apple clashed with lawmakers again in Washington yesterday, as the world’s largest archive of drunk photos and minion memes renewed its pledge for privacy on its messaging platforms.

Attorney General William Barr once again called for tech companies to create a “backdoor” for law enforcement into their encrypted messaging apps.

The state of the art encryption on these apps, the AG says, is a pain in the ass for law enforcement and provides protection for drug cartels, child pornographers, and those monsters who collect the screams of children and use it to power their futuristic Monstropolis.

Facebook’s execs don’t necessarily disagree with Barr (WhatsApp’s encryption is awesome for drug dealers). But if they if they create a “backdoor” for law enforcement, every criminal, hacker, and Kim Jong Il will be able to let themselves in and rifle through your fridge, so to speak.

“The ‘backdoor’ access you are demanding for law enforcement would be a gift to criminals, hackers and repressive regimes, creating a way for them to enter our systems and leaving every person on our platforms more vulnerable to real-life harm,” the execs wrote in a letter to Barr yesterday.

“People’s private messages would be less secure and the real winners would be anyone seeking to take advantage of that weakened security. That is not something we are prepared to do.”

Mark Zuckerberg’s Privacy Violation Machine has struggled for years to balance the demands of law enforcement and the privacy of its users. But after several planet-sized privacy whoopsies, the company is pivoting hard to rebrand itself a privacy-focused, encryption machine.

In March, the amorphous blob of energy wearing the Mark Zuckerberg suit unveiled a grand plan to encrypt and knit together the back ends of all of Facebook’s messaging services, making one giant encrypted messaging monster.

This would be a colossal feat of engineering that could take years. But analysts suspect it’s intended to serve as a dry run for a back-end encryption service that Facebook plans to roll out and monetize in the future.

Predictably, this scares the crap out of anyone involved with surveillance (who will have to go back to sitting in vans and peeing in cups if they can’t spy on user data).

At an event before the hearing, AG Barr said dealing with encryption was one of the Justice Department’s “highest priorities.”

Facebook is selling the idea that “no matter what you do, you’re completely impervious to government surveillance,” said Barr. “Do we want to live in a society like that? I don’t think we do.”

Lawmakers on both sides of the aisle came down hard on Facebook and Apple at yesterday’s hearing, threatening legal action if these nerds don’t fall in step with lawmakers’ directives.

In his opening statement, Committee Chairman and Haunted Doll Lindsey Graham (R-SC) said that he appreciates “the fact that people cannot hack into my phone” and steal pictures of him dressed in clothes he took off of a GI Joe.

“You’re going to find a way to do this, or we’re going to do this for you,” said Graham, putting his adorable little foot down. “You’re either the solution or you’re the problem.”

The majority of the senators at yesterday’s hearing stood behind AG Barr. But Senator Mike Lee (R-UT) warned lawmakers to be wary of the unintended consequences like drug cartels simply buying ways to hack through back doors.

I’d like to know where you fall on this issue. Should the government be allowed to spy on everyone and anyone’s messages? Or is the cost to privacy and security too high?

Click here to send me an email and we’ll have it out in the comments section tomorrow.

U.S. regulators gave Boeing the green light to keep flying the 737 Max after its first fatal crash last year, despite concluding it would crash into the ground a whole bunch over the lifetime of the aircraft.

In a report compiled in November of 2018, the Federal Aviation Administration predicted Boeing’s Crashmaster 737 would have averaged about one fatal crash every two or three years.

This rate of smashing into the ground and killing everyone on board is much higher than the industry average. But the FAA and Boeing ultimately concluded that that’s an acceptable amount of customers and employees dying on a regular basis to save a couple of bucks.

Over the Fall-Out-of-the-Skymaster’s lifespan (30-45 years), the FAA predicted as many as 15 catastrophic accidents. To put that into perspective, that figure is comparable to every Boeing crash in the last 30 years from the 757, 767, 777, 787, and regular 747 models combined.

A December 2018 report from the FAA said they found the risk “sufficiently low to allow continued growth of the fleet and operations until the changes to the system are retrofitted.”

However, according to a veteran FAA engineer familiar who spoke with the Wall Street Journal, the MAX’s projected accident rate was way above the FAA safety limits.

They questioned how anyone could live with themselves knowing they were greenlighting the deaths of thousands of loyal customers. (Insert animated gif of man drying tears with massive wads of cash.)

Had the MAX stuck to the FAA’s schedule of an intermittent catastrophe once every few years, we probably wouldn’t have noticed that these things were exploding and killing everyone on board more than any other plane does.

But just five months after the Lion Air crash in Indonesia, an Ethiopian Airlines flight crashed as a result of the same technical problem hand-waved away as “acceptable risk.”

In total, 346 lives were lost before the government stepped in and said, “Hey what’s going on with all the exploding planes here, guys?”

The price per share of Boeing (BA) dropped for the third session in a row today, heading towards the end the year just 9% above its Jan. 2 opening and lagging behind the DJIA’s average of 19%.

Shares of Peloton slipped on the treadmill and shot groin-first into a cactus yesterday, as a notable short seller valued the company at a seventh of its recent market price.

In a report released yesterday morning, Citron Research predicted Peloton’s $2,200 exercise bike with a tablet attached would face aggressive competition from rivals offering the same thing for less than an arm, a leg, and your firstborn child.

Peloton is trying to stamp out those pesky competitors, filing multiple lawsuits alleging “tablet on an exercise bike” is a genius innovation that no one else can make.

But famous short-seller Andrew Left, editor of Citron Research, doesn’t think Peloton can keep up with the copycats.

“While Peloton has enjoyed a first mover advantage, the lack of differentiation of its bike has finally caught up to it as the competition is not only making virtually identical exercise bikes but ones that are both more affordable and functional,” Citron Research said in its report.

Left predicts that Peloton’s stock will eventually fall to just $5, a fraction of the $29 it IPOed at earlier this year. The stock plummeted 5.72% after Left published his hot take, and continued to tumble today, falling another 5.74% at time of writing.

This puts Peloton at about 16% down from last week, when the stock took another tumble due to a miscalculation from the Peloton ad department that what women want for Christmas is to be told to lose weight. 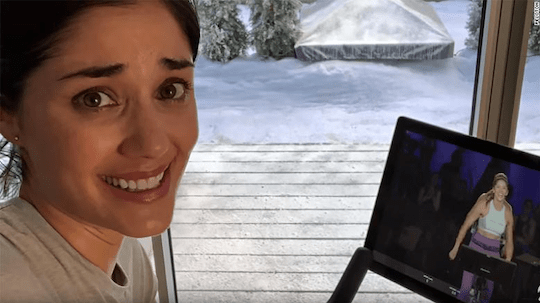 Over the past 40 years, college tuition fees have tripled, far outstripping the rise of income levels and inflation (and the actual quality of the education being doled out).

In one of the top schools in America, your kid could be looking at tuition costs of $60k a year. And that’s before students even start to think about textbooks, living costs, or getting hammered drunk three times a week.

However, there’s a new way students can pay for college, devised by one of the sharpest economic minds America has ever seen (and it doesn’t involve selling your body or medical testing).

It starts with someone — either a school or a private company — giving a lump sum of money to a potential student. (Let’s call him Derek.)

In return, the Derek promises to pay back a percentage of all his income for a set amount of time after he graduates.

Unlike regular stocks, you can’t buy and sell shares in Derek as you please. (“Derek’s girlfriend has left him. SELL! SELL! SELL!”)

Instead, you receive a portion of Derek’s income for a set period of time — typically eight or 10 years after graduation, depending on how much Derek borrows.

Because he’s paying back a percentage of his income (not a fixed amount) the more money Derek makes, the more he pays. Derek might be kind of a ding dong and end up working in the local bong store for 35K a year before tax.

But the “investors” are counting on the strong earners balancing out the weak ones.

Famed American economist Milton Friedman originally proposed the concept way back in 1955, in his essay The Role of Government in Education:

[Investors] could “buy” a share in an individual’s earning prospects: to advance him the funds needed to finance his training on condition that he agree to pay the lender a specified fraction of his future earnings. In this way, a lender would get back more than his initial investment from relatively successful individuals, which would compensate for the failure to recoup his original investment from the unsuccessful.

But in the last decade or so, income share agreements were implemented successfully throughout Latin America.

They first found a home in the U.S. in the forward-thinking tech boot-camps that teach young adults to code. But now, various universities and companies are testing the waters.

Purdue University launched the program in 2016, which means it’ll be a while if we have any data on if they are working or not. But the first recipients, of which there were 500, have already graduated and entered the workforce.

One student who spoke with NPR received $50,000 directly from Purdue. In exchange, she has promised to pay 15% of her income for eight years after she graduates.

After that, she’ll be done with her loans no matter what. But is there a downside to this concept that’s being overlooked? One that could severely damage the U.S. education system?

We’ll discuss this more in tomorrow’s One Last Thing.