Well, there you go, folks. That’s the twist at the beginning of the third act. President Trump and First Lady Melania Trump have tested positive for coronavirus, just four weeks from the worst election ever.

The president announced the results of the test in a tweet that woke up the entire country, shortly before 1 a.m. this morning.

The announcement came hours after the confirmation that Hope Hicks, a top advisor who has been chilling in the president’s corona zone all week, had tested positive for the virus.

US stock futures plunged moments after the president hit “send tweet,” as investors across the nation gave a collective “COME ON!” Just ahead of the open this morning, Dow futures were Dow-n nearly 500 points.

White House physician Sean Conley said the president and first lady were both “well at this time” and would remain at the White House for the duration of their infectious period. And so, just four weeks out from an election, President Trump has been railroaded off the campaign trail to self-quarantine for at least two weeks.

The president, who has been criticized for downplaying the severity of the virus, was scheduled to attend several indoor, unmasked campaign events in the coming weeks, including a rally in his hotel in Washington today.

Trump joins the distinguished ranks of U.K. Prime Minister Boris Johnson and Brazilian President Jair Bolsonaro to become one of the few world leaders to test positive for the ‘rona.

According to White House officials, the president is reportedly experiencing “mild symptoms” of the virus this morning. The virus may pass through his system with little more to show than your typical flu-like symptoms. But according to the CDC, the president’s age of 74 puts him at higher risk of complications from the virus — at least five times more likely to be hospitalized than a person in their twenties with the virus, and 90 times as likely to die.

Should the president be incapacitated by his symptoms, he could temporarily transfer power to Vice President Pence under the 25th Amendment.

If something were to happen to the VP, the speaker of the House, Nancy Pelosi, is next in the line of succession, followed by the Senate president, Senator Chuck Grassley.

Let’s hope it doesn’t come to that.

Buckle up, folks. It’s going to be a bumpy two weeks.

Ireland’s Supreme Court ruled this week that Subway’s sandwiches are not made with bread, directly contradicting step 2 in the Subway sandwich-making process. 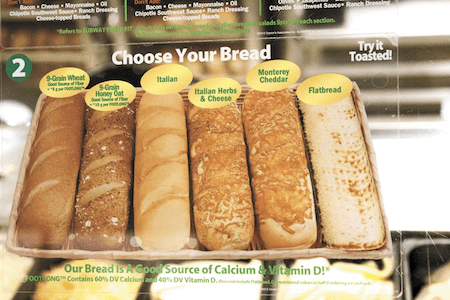 Under Irish law, Subway’s selection of loaves does not meet the legal definition of “bread.”

To be considered bread in the Emerald Isles, sugar can make up no more than 2% of the flour content in your dough. Any more than that, and you’re baking a cake, baby.

“If [the sugar content] exceeds the limitation, the resulting product falls outside the definition of ‘bread’ for the purposes of the act,” said Justice Donal O’Donnell, while eating a Sweet Onion Chicken Teriyaki donut.

In Ireland, bread is considered a “staple food” and taxed lower at a lower rate. Cake, pastries, and confectionery, on the other hand, fall under the umbrella of “luxury items” and are taxed at a higher rate because little victorian orphan children don’t deserve tasty sugary treats.

As such, Subway will have to pay additional tax on every meatball eclair and steak and cheese croissant sold in one of their Irish locations.

Subway took issue with the ruling, stating that its bread “is, of course, bread.”

Google says it will pay news publishers $1 billion over the next three years because it feels bad for systematically bringing the industry to its knees in the last decade.

The company said its signed agreement with nearly 200 dying businesses in Germany, Brazil, Argentina, Canada, the U.K., and Australia.

“This financial commitment – our biggest to date – will pay publishers to create and curate high-quality content for a different kind of online news experience,” said CEO Sundar Pichai, while raking the ashes of investigative journalism.

The funding will be added to the news licensing program Google launched at the beginning of the pandemic, seeking to defuse tensions with an industry that would happily catapult Google into the sun.

Facebook unveiled a similar program last year, offering to pay US news companies like the Wall Street Journal and the Washington Post potentially millions of dollars for their headlines.

Critics of Google and the enormous power they wield over the publishing industry are skeptical of the move, pointing out that it only serves to give Google more control over the content that’s produced.

“Many are quite cynical about Google’s perceived strategy,” said Angela Mills Wade, executive director of the European Publishers Council, told the Associated Press.

“By launching a product, they can dictate terms and conditions, undermine legislation designed to create conditions for a fair negotiation, while claiming they are helping to fund news production.”

Are you too busy to read every One Last Thing? Is reading for nerds? Can anyone even read anymore?

Check out the One Last Thing audio edition. It’s got the biggest money moving news of the week, just like your daily issue, but on your favorite podcast app.

You can listen to the latest episode here on Spotify or iTunes. Or simply search your preferred podcast app for “One Last Thing.”

In this week’s hot-hot episode:

Subscribe to our feed and you can listen to every episode as soon as it drops on Friday, even before you get the email alert in your daily One Last Thing newsletter.