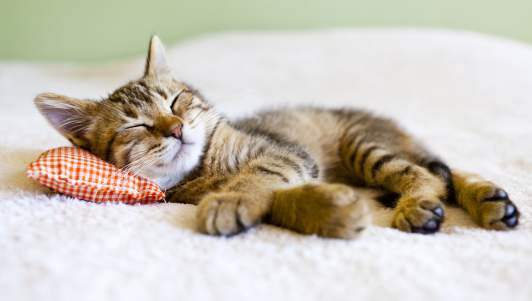 MENIFEE, CA—Local unemployed cat Autumn got another good day's rest Thursday in preparation for a long evening running up and down the stairs at random times. "Sporadically running upstairs, and then downstairs, and then upstairs again to keep my humans awake is exhausting," Autumn told reporters, yawning, as she woke up from her seventh nap of the day. "It's not an easy job, but someone has to do it. Now, if you'll excuse me, I have to go meow by my food dish so my humans can move the food around and make it look like there's more food in there than there is." The cat says she is planning on some new moves today, including a few parkour tricks like jumping off the walls and kicking over a laundry basket and then fleeing through the house like a bat out of heck. Autumn has also filed a complaint of animal abuse against her owners for only holding the door open for her for seven hours at a time while she decides if she wants to go outside or stay inside.

The post Cat Rests Up In Preparation For Long Night Running Up And Down Stairs appeared first on The Babylon Bee.