What Jack Dorsey Should Realize about Twitter from Reading Rothbard 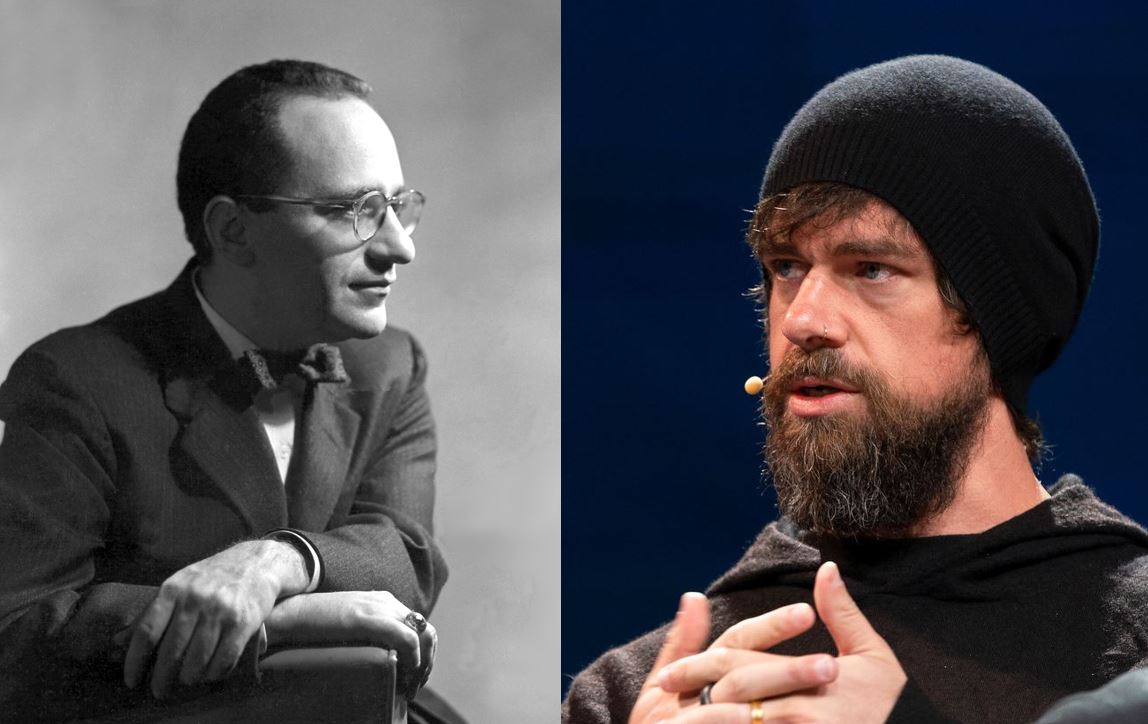 On August 13, Twitter founder and CEO Jack Dorsey took the internet by surprise when he tweeted a link to an anarchist work titled Anatomy of the State.

Written by hard-hitting libertarian theorist Murray Rothbard (1926-1995) in 1974, the essay presents a scathing exposé of the State as an institution. The extent to which Dorsey actually agrees with Rothbard is impossible to know, given that he tweeted the essay without comment.

In any case, there are a few points in Anatomy of the State that Dorsey should take to heart, especially in light of Twitter’s troubling relationship with the State these days.

What the State Is (and Isn’t)

The essay lays out some basic observations about the nature of the State. In particular, Rothbard highlights what the State is not, what it is, and how it preserves itself.

What the State is not: He first sets out to debunk the commonly accepted false equivalency between the State and society. “‘We’ are not the government,” Rothbard insists. “The government is not ‘us’.” Though many have a rosy view of government as “‘the human family’ getting together to decide mutual problems,” this view is far removed from reality.

What the State is: But if the State is not “us”, then what is it? “Briefly,” Rothbard answers, “the State is that organization in society which attempts to maintain a monopoly of the use of force and violence in a given territorial area…”

He adds that the State “is the only organization in society that obtains its revenue not by voluntary contribution or payment for services rendered but by coercion.”

Here, the true nature of the State is laid bare for all to see. The collectivist rose-colored glasses are removed, and the State is revealed as little more than “a gang of thieves writ large,” as Rothbard often put it. “The State provides a legal, orderly, systematic channel for the predation of private property,” Rothbard continues. “It renders certain, secure, and relatively ‘peaceful’ the lifeline of the parasitic caste in society.”

The State’s “organized crime” is so ubiquitous that most people don’t even notice it.

How the State preserves itself: But the State is not inevitable. It must take great care to preserve itself if it wants to continue its “legal plunder” (as Frederic Bastiat put it). This much is perhaps obvious. But what is not so obvious is the means by which it preserves itself. Contrary to common belief, the State does not succeed because of its military strength or the size of its territory. Rather, its survival depends on its legitimacy in the eyes of its subjects.

Consider the USSR for example, or Nazi Germany. Though Stalin and Hitler were undoubtedly dictators, they only had power because millions of others were willing to carry out their commands, whether eagerly or out of resignation. The reason that those governments became dictatorial is because the majority of the people actually wanted them to be dictatorial, or at least they preferred a dictatorship to the perceived alternative.

Of course, a well-armed minority could overcome a majority for a time. But as Rothbard’s mentor Ludwig von Mises explains in his book Human Action, such an order of things cannot endure.

“All victorious minorities who have established a lasting system of government have made their sway durable by means of a belated ideological ascendancy,” Mises writes. “They have legitimized their own supremacy either by submitting to the ideologies of the defeated or by transforming them. Where neither of these two things took place, the oppressed many dispossessed the oppressing few either by open rebellion or through the silent but steadfast operation of ideological forces.”

As Mises taught, and Rothbard heartily agreed, political power (or “might,” as Mises termed it) is founded on ideology. “Might,” Mises wrote, “is... not a physical and tangible thing, but a moral and spiritual phenomenon.”

So, given that political might comes from ideology, those who wish to establish or maintain their rule have a very simple yet insidious task. They must shape the opinions of the people. More specifically, they must convince the people that their government is not only legitimate, but actually necessary, helpful, and benevolent.

The task of the State-aligned intellectual is to promote an ideology that endorses and encourages State actions. Their job is to mold the opinions of the masses toward widespread agreement on the validity, necessity, and utility of the State. And since the State is in constant need of opinion-molding, it has formed alliances with intellectuals throughout history.

Rothbard further explains this alliance in another essay. “Since its rule is exploitative and parasitic,” he remarks, “the State must purchase the alliance of a group of ‘Court Intellectuals,’ whose task is to bamboozle the public into accepting and celebrating the rule of its particular State...In exchange for their continuing work of apologetics and bamboozlement, the Court Intellectuals win their place as junior partners in the power, prestige, and loot extracted by the State apparatus from the deluded public.”

Rothbard enumerates a variety of tactics which intellectuals have used to provide ideological support for the State over the centuries, from the idea of a “divine right of kings” to fear-mongering.

But one of these tactics has proven to be especially effective in recent times. “In the present more secular age,” Rothbard writes, “the divine right of the State has been supplemented by the invocation of a new god, Science. State rule is now proclaimed as being ultrascientific, as constituting planning by experts. But while ‘reason’ is invoked more than in previous centuries, this is not the true reason of the individual and his exercise of free will; it is still collectivist and determinist, still implying holistic aggregates and coercive manipulation of passive subjects by their rulers.”

If you’ve ever heard someone say “trust the experts,” you are familiar with this new god. Modern-day technocrats love to proclaim that they know what’s best and that they, by means of the State, should make all the important decisions. And yet, while the advice of experts should certainly be given due consideration, they too are fallible, and their knowledge is woefully limited. As such, they have no business commanding a monopoly on violence, nor do they have a right to command a monopoly on civil discourse in the public square.

“Court Experts” (a subset of the Court Intellectuals) are especially useful in times of crisis, when they are invariably called upon to provide intellectual justifications for States to seize emergency powers. And as Rothbard discusses, a State is always on the look-out for such opportunities to “transcend its limits.”

COVID-19: A Perfect Storm for Power

Historically, wars have served as opportune times for the State to “transcend its limits.”

Wars are not the only events to afford such opportunities, however. History shows that financial crises have also served as opportune times, Higgs notes. But in 2020, the State found a new excuse to expand its authority with the help of Court Experts: the COVID-19 pandemic.

The pandemic has been used to justify an unprecedented peacetime expansion of government, which included more than $6 trillion in stimulus spending and vast infringements on civil liberties.

Led by Court Experts such as Dr. Anthony Fauci, a chorus of bureaucrats, public intellectuals, and lawmakers called for “ultrascientific” central planning of society to protect humanity from the coronavirus. These emergency powers gave governments unprecedented control over business, and it was achieved with the assistance of other Court Intellectuals—such as Big Tech and establishment media—who helped the State “bamboozle the public into accepting and celebrating” its burgeoning COVID regime.

The results of these actions have been disastrous. Lockdowns had a particularly devastating impact in poor countries, caused historic economic damage worldwide, and resulted in widespread adverse health consequences (mental and physical); meanwhile, they did little or nothing to control the spread of the virus, according to an abundance of scientific research.

None of this harmed Dr. Fauci, however. The 80-year-old doctor has graced numerous magazine covers, was named one of People magazine’s “2020 People of the Year,” has been deemed the Sexiest Man Alive by The Guardian, and is currently the subject of a hagiographic Disney documentary.

The benefits of being a Court Intellectual are clear. As a “junior partner” of the State, Fauci is entitled to “the power, prestige, and loot extracted by the State apparatus from the deluded public.”

Meanwhile, dissent is punished—largely with the help of the opinion molders.

Despite its best efforts, the State’s ability to shape public opinion on its own is limited. Thus, they require help.

In this regard, the State has found a useful ally in Big Tech, which has supported its COVID regime in various ways—including overt propaganda.

For example, if you’ve visited Twitter in recent weeks, you’ve probably seen a textbook illustration of propaganda, which is defined as “information, especially of a biased or misleading nature, used to promote or publicize a particular political cause or point of view.”

As many have observed, the platform’s “trending” section often appears to be little more than a laundry list of State-approved narratives.

How many days is Twitter going to leave this bit of propaganda up on its site?

I'm getting a little irritated to wake up and see it there every morning. pic.twitter.com/DpeNalXB9B

But propaganda is just one tool at the State’s disposal. Another is the silencing of dissent. Of course, the First Amendment prevents the government from doing this directly, but it can still outsource this job to others—and it has.

Earlier this year Reuters revealed that the White House was working hand-in-hand with Facebook to fight “misinformation,” while YouTube has admitted it has deleted 1 million videos containing COVID “misinformation” and has also deleted pages from prominent individuals, including Ron Paul.

By using Big Tech to silence those who stray from its narrative, the State doesn’t just crush dissenting voices. It creates a climate of fear that discourages individuals from speaking out at all out of fear of being censored, suspended, or banned.

Regrettably, this is the kind of climate that Jack Dorsey has been perpetuating, consciously or not.

As previously noted, it's unclear if Dorsey has actually read Rothbard's essay. But if he were to really absorb the lessons from Anatomy of the State, he would be deeply uncomfortable with the role Twitter has been playing for the State throughout the pandemic.

Twitter has permanently suspended another anti-lockdown leader, Patrick Henningsen @21Wire, founder of @21stCenturyWire, for no apparent reason at all and deleted all of his tweets. pic.twitter.com/S6aFMM0Ppy