Survey Finds No Rise in Anti-Asian Violence, Assaults Declined in 2020

Some recent evidence has suggested that the national period of declining crime—which began in the mid-1990s, as rate of violence fell dramatically in the U.S.—may be over: The most recent Uniform Crime Report (UCR), an important though incomplete snapshot of homicides nationwide, found that homicide had increased by 30 percent from 2019 to 2020.

But just-released data from the National Crime Victimization Survey (NCVS) paints a much less depressing picture. According to the 2020 NCVS report, the violent crime rate actually declined last year, if homicides are excluded. Moreover, the popular narrative that former President Donald Trump's anti-China rhetoric caused some spike in hate crimes against Asian-Americans appears to be wrong. For Asian-American victims, both the violent crime rate and simple assault rate declined from 2019 to 2020. 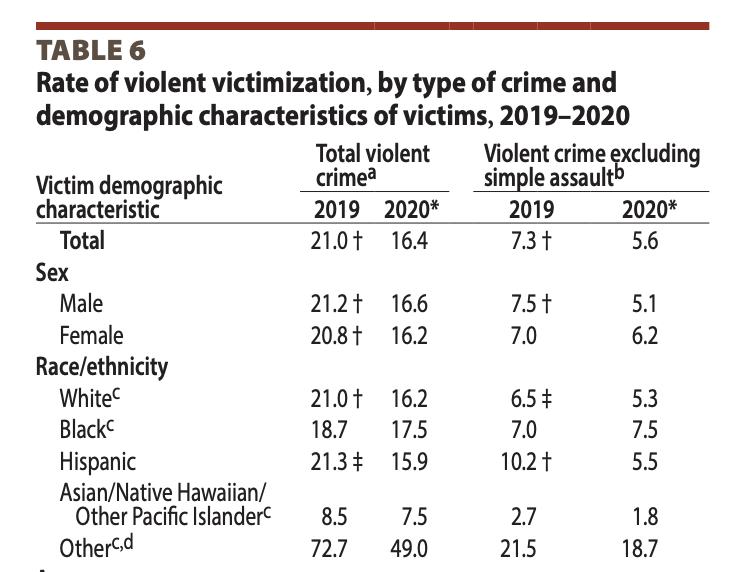 It's important to interpret these findings cautiously. The NCVS does not count homicides; the data comes from telephone interviews with random Americans. It's thus a scientific survey, rather than a tally of actual crimes.

The UCR, on the other hand, consists of crimes reported to the FBI by law enforcement agencies. Police departments are not required to report any information at all, which means that the UCR is in some ways more accurate—these are verified reported crimes—but also more statistically unreliable. Year-to-year fluctuations in the data might represent different reporting procedures rather than any actual increase in crime; the overall number of crimes reported to the FBI is obviously just a small snapshot.

The public should take the findings from both reports with a grain of salt. It could be the case, obviously, that murders in cities increased while other categories of crime decreased elsewhere; it's also possible that certain minority communities suffered increased crime in a manner that isn't captured by the data. But with so much bad news about rising violence, the NCVS data suggests that things might not be as bad as we think.

"I opened the NCVS today fully expecting to see significant increases in violence and declines in reporting," wrote John Pfaff, a law professor at Fordham University. "I figured it was going to tell a worse story than the UCR. So I was quite surprised by what I saw. It did not at all confirm my priors."