The optimistic scenario goes like this. America shakes off what remains of the pandemic in the coming months without the need for trillions in additional borrowing, Congress doesn't pass any more deficit-busting spending plans while also allowing the 2017 tax cuts to expire in 2025 as planned, and the economy performs consistently well for the next, oh, three decades as we dodge recessions, wars, climate issues, and anything else the world might throw our way.

Under that set of circumstances, the national debt will merely be twice the size of the entire U.S. economy by the middle of this century.

If the last two years have taught us anything, of course, it's that crises can appear with little warning. The federal government was already more than $23 trillion in debt in early 2020, but it has borrowed about $6 trillion more since then—much of it to fund pandemic-era stimulus bills. Pandemic-era debt isn't the main cause of the debt tsunami that's threatening to wash over the government in the next few decades—Social Security, Medicare, Medicaid, and decades of spending more than the government takes in are the real culprits—but so much borrowing in so short a period of time has heightened the stakes.

With inflation running at a 40-year high, the Federal Reserve has indicated that it will consider raising interest rates early next year. That's standard-issue monetary policy and basic macroeconomics, but America's high levels of debt make the maneuver more fraught because higher interest rates will reverberate through the government's own debt.

"Fiscal policy has hamstrung the Federal Reserve," says Brian Riedl, a senior fellow at the Manhattan Institute and a former Senate budget staffer. "For the Federal Reserve to do basic, commonsense macroeconomic stabilization, it's going to hit the national debt hard because Congress has been so irresponsible."

In a new report, Riedl outlines the fiscal and monetary trap facing federal policy makers and central bankers. In short: Rising interest rates will make the national debt a bigger problem. And the already-huge national debt makes it more difficult to combat inflation—inflation that has been triggered, at least in part, by debt-financed spending. 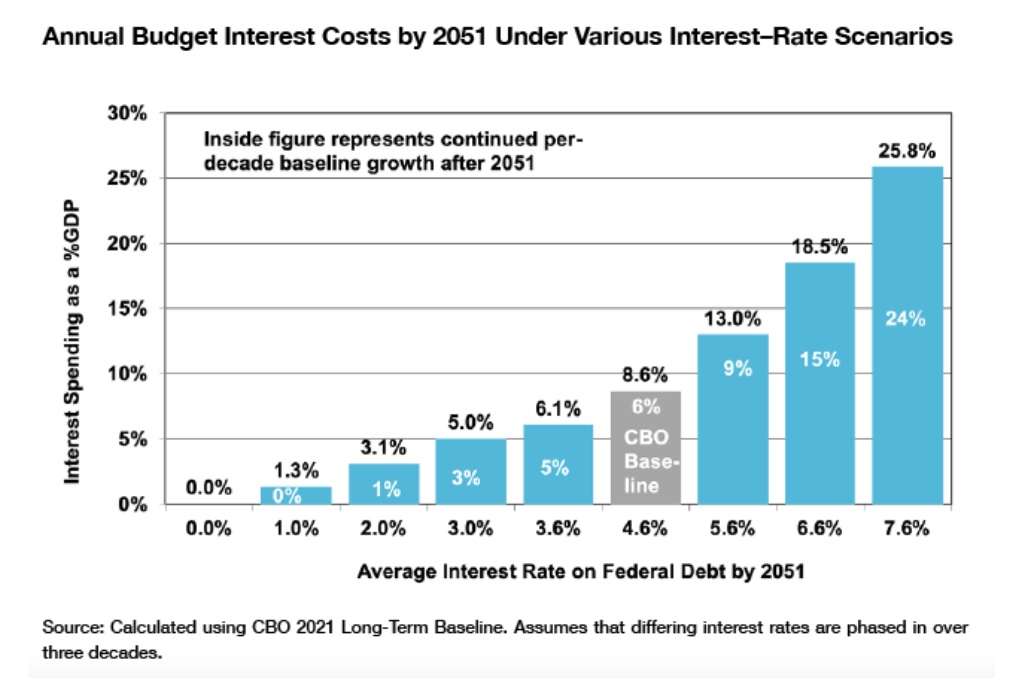 While the overall amount of debt matters too, the more important consideration here is how much the federal government spends each year to make interest payments on the debt. As Bruce Yandle, an economist at the Mercatus Center, explained last month (and again in the current issue of Reason), a combination of falling interest rates and low inflation allowed the government to stock up on debt without facing higher annual costs for much of the past two decades. "The interest cost of the national debt in 2008 was $253 billion and remained at about that level through 2015," he writes, even though the overall amount of debt doubled in those years.

In effect, a decade of low inflation and low interest rates taught politicians that there was no immediate budgetary reason to limit borrowing. The long-term risk of massive debt was always there, but politicians are nothing if not good at ignoring problems that won't metastasize until they are out of office.

This is likely no longer the case. In the same way that a high-interest credit card is more expensive to pay off than a lower-interest car loan, higher interest rates will add to the annual cost of servicing the federal debt. Even if Congress didn't authorize another penny of borrowing—it's OK to laugh—annual payments on the debt will grow if interest rates rise.

And because every dollar spent on financing the debt is a dollar that can't be spent on anything else, higher interest payments on the debt will force Congress to do one of two things. It will either have to cut other parts of the budget to pay for growing debt payments, or (more likely) it will have to drain even more revenue out of the economy in the form of higher taxes.

"If interest rates rise at any point in the future, the entire national debt will roll over into those higher interest rates" relatively quickly, Riedl tells Reason.

The Congressional Budget Office's (CBO) long-term budget outlook, which serves as a baseline for projections regarding future debt costs and other budgetary matters, assumes that interest on the national debt will rise to 8.6 percent of gross domestic product (GDP) by 2051—that's about $1.9 trillion in today's dollars. That's the rosy scenario I described at the beginning—a future where there are no unexpected borrowing splurges and no massive economic disruptions. Even so, this scenario means that interest on the debt would be the largest portion of the federal budget, and would consume about half of all projected tax revenue.

If interest rates average two percentage points above the CBO baseline, interest costs on the debt will be equal to 100 percent of tax revenue by 2051, Reidl calculates. Every single dollar of tax revenue (based on the current tax code) would be directed to paying for money already borrowed and spent. That means nothing left over for the military, social programs, entitlements, or anything else.

It's those stratospheric costs that the Federal Reserve must consider before deciding to raise interest rates. That's not supposed to be part of the Federal Reserve's purview, but years of fiscal profligacy from Congress have created a mess the central bank is ill-suited to solve.

The central bankers may decide that it's better to let inflation run its course than to risk precipitating a debt crisis, but that's a decision that would have dire consequences too. Consumers will pay higher prices, workers will see real wages depressed, and anyone trying to save for retirement will see those savings eaten away by inflation.

For too long, federal policy regarding the national debt has been driven by a sense that the good times would never come to an end. Low inflation and falling interest rates may have lulled politicians into a false sense of security, and poor budgeting left the nation's balance sheet vulnerable to a coming crisis of the government's own making.

Join our team of over 2227 Freedom Fighters.