Snitches Get Riches From the FBI

Snitches have a new way to make money in Charlotte, North Carolina. By texting the FBI and tattling on people that have illegal cash, informants can make up to 25 percent of the money seized, according to an FBI news release. Jilted lovers, jealous friends, and nosy neighbors can now score big. The good news for anyone tempted by the offer is that federal law makes asset confiscation far too easy.

By using civil forfeiture, law enforcement agencies can take cash, cars, and other assets without convicting anyone of wrongdoing. The government doesn't have to make an arrest, develop a theory about a specific crime, or even witness illegal behavior. Agents can bypass the criminal courtroom altogether. 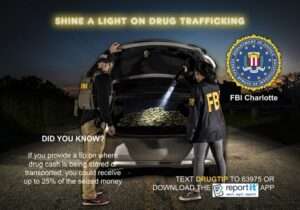 According to the release, the tip line is designed to help agents intercept drug trafficking shipments through Charlotte. An example campaign graphic shows two agents gazing at a large pile of cash in the trunk of a car. A glowing neon headline reads: "Shine a light on drug trafficking." The fine print focuses on the kickback, stating that if the tip "on where drug cash is being stored or transported" pans out, "you could receive up to 25% of the seized money." The message is clear: snitching can be rewarding. But the ad fails to mention four important details.

First, possessing cash is not a crime. The ad suggests that storing or transporting large amounts of currency is somehow wrong, yet neither activity is illegal. Many people conduct legitimate business in cash out of necessity—more than 5 percent of U.S. households are "unbanked," meaning no household member has access to a checking or savings account.

As a group, unbanked adults are poorer and younger than "fully banked" adults. They are also more likely to be black, Hispanic, or of another non-white race or ethnicity. Agents who vilify cash might not have racial motives, but they discriminate when they use cash as an indicator of crime without collecting real evidence.

Second, civil forfeiture rarely targets drug lords. While the campaign ad portrays a major bust, such cases are the exception. The Institute for Justice (IJ), a public interest law firm, crunches the numbers in its nationwide Policing for Profit study. Federal forfeitures must be at least $5,000 when no criminal prosecution occurs, but at the state level across the country, the median cash forfeiture is just $1,276.

An IJ survey of civil forfeiture in Philadelphia finds that police routinely take less than $100, and one survey respondent reported a forfeiture of just $25. Officers in New Jersey once seized just $11 off someone, and Illinois officers confiscated a cashier's check for 34 cents. When the police make an arrest as part of civil forfeiture, the target is usually a petty criminal.

Third, the police have financial motives. The ad mentions a generous cut for tipsters but omits where the rest of the proceeds go. Congress allows federal agencies to keep 100 percent of everything they collect, and many states have similar policies. The result is a perverse incentive that taints the entire process. The FBI Charlotte Field Office vows to expand its pay-per-tip program across North Carolina if the campaign keeps "even one shipment of drugs off the streets." But research shows that civil forfeiture does not reduce drug usage or lower crime rates; it simply raises revenue.

Lastly, civil forfeiture has never been authorized in North Carolina, but the state has made millions through the process of "equitable sharing." Here's how it works: Local and state agencies seize cash and then pass the paperwork to their federal partners for civil forfeiture, intentionally circumventing state law. Once the process is complete, the U.S. government returns a cut—usually about 80 percent—which local and state agencies keep for themselves. Between 2000 and 2019, North Carolina generated more than $293 million in forfeiture revenue from equitable sharing. That comes out to more than $40,000 per day, every day, for 20 years.

The new FBI campaign purports to shine a light on drug trafficking, but what it really exposes is the corruption of civil forfeiture.

The post Snitches Get Riches From the FBI appeared first on Reason.com.