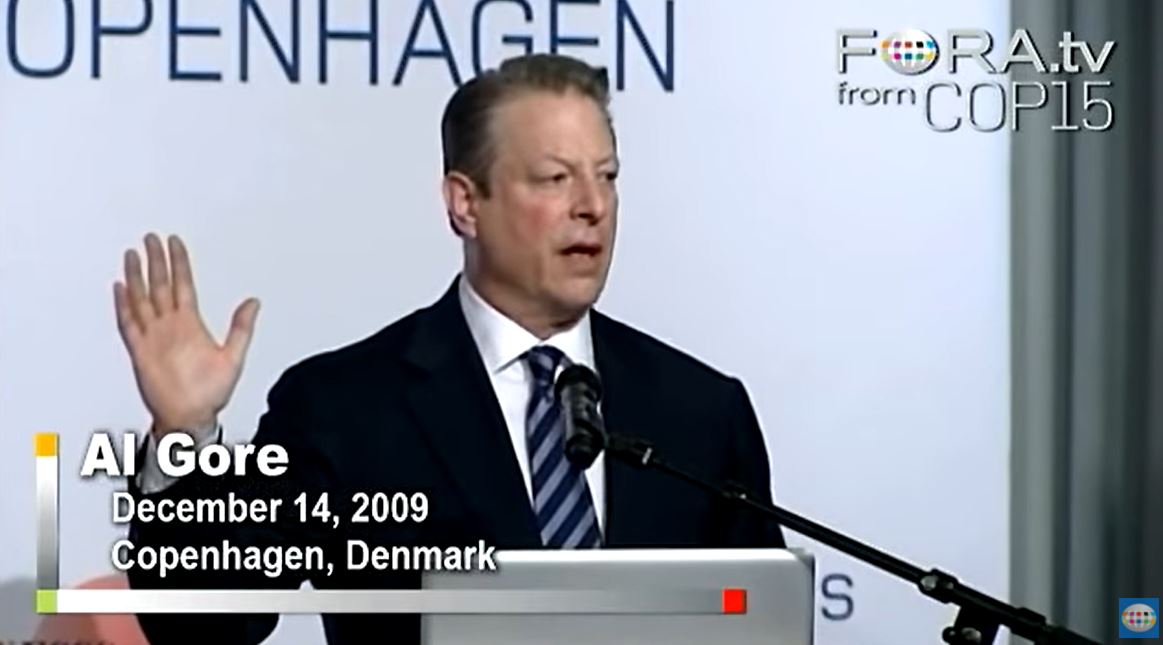 While speaking at a climate change summit in Denmark in 2009, former Vice President Al Gore made an alarming statement.

Citing research from Dr. Wieslaw Maslowski, a professor of oceanography at the Naval Postgraduate School in California, Mr. Gore said it was likely that the north polar ice caps would soon be completely melted.

"These figures are fresh,” Mr. Gore said. “Some of the models suggest to Dr. Maslowski that there is a 75 percent chance that the entire north polar ice cap, during the summer months, could be completely ice-free within five to seven years."

In his 2006 documentary An Inconvenient Truth, Gore cited studies which said “in the next 50 to 70 years” the ice caps would be completely melted. What had caused the melting to suddenly increase by a factor of ten? Well, nothing. As NPR noted, Mr. Gore was misrepresenting the data of Maslowski.

"It's unclear to me how this figure was arrived at," Dr. Maslowski told The Times UK. "I would never try to estimate likelihood at anything as exact as this."

Fortunately, both Gore and Maslowski were wrong.

In 2009, many responded playfully to Gore’s faux pas.

“Like most politicians, practicing and reformed, Al Gore has been known to stretch the truth on occasion,” NPR noted, adding that Gore had also claimed he’d helped create the internet.

Today, misinformation is treated in a much different way—at least in some instances. Throughout the COVID-19 pandemic, many writers and scientists who questioned the government’s use of lockdowns, mask mandates, enforced social distancing, and vaccine mandates were banned from social media platforms while others lost their jobs.

Earlier this month, San Francisco attorney Michael Senger was permanently banned from Twitter after calling the government’s pandemic response “a giant fraud.” In August, it was former New York Times reporter Alex Berenson who got the boot after questioning the efficacy of vaccines in preventing COVID-19 transmission. Months earlier it was author Naomi Wolf, a political advisor to the presidential campaigns of Bill Clinton and Al Gore.

Twitter is hardly alone, of course. Facebook and YouTube also announced policies banning the spread of COVID misinformation, particularly information related to vaccines, which is what got Drs. Peter McCullough and Robert Malone ostracized and banned.

Some may argue these policies are vital, since they protect readers from false information. However, there is nothing that says Big Tech can only ban information that is false. On the contrary, in court proceedings Twitter has claimed it has “the right to ban any user any time for any reason” and can discriminate “on the basis of religion, or gender, or sexual preference, or physical disability, or mental disability.”

Facebook, meanwhile, has argued in court that the army of fact-checkers they employ to protect readers from false information are merely sharing “opinions,” and are therefore exempt from defamation claims.

‘Freedom of Communication Is Indispensable’

What Big Tech is doing is concerning, but the fact that this censorship is taking place in coordination with the federal government makes it doubly so.

“We are in regular touch with these social media platforms, and those engagements typically happen through members of our senior staff, but also members of our COVID-19 team,” Psaki explained.

All of this is being done in the name of science, but let’s be clear: there’s nothing scientific about censorship.

This week I’ll participate in an event at the Kirby Center in Washington, DC, hosted by the Academy for Science and Freedom. Led by leading scientists Scott Atlas, Jay Bhattacharya, and Martin Kulldorff, the event will explore the future of science in the face of widespread censorship, which has eroded faith in science.

To rebuild that trust we must remember that censorship is about power, not science, and recall the wisdom of one of history’s greatest scientists: Albert Einstein.

“[F]reedom of communication is indispensable for the development and extension of scientific knowledge … it must be guaranteed by law,” Einstein wrote in a 1940 essay on freedom and science. “But laws alone cannot secure freedom of expression; in order that every man may present his views without penalty there must be a spirit of tolerance in the entire population.”

That spirit of tolerance is missing today and must be restored. Scientists and public officials will make mistakes—just ask Al Gore—but purging ideas from the public square is a sign of a dogmatic society, not a scientific one.