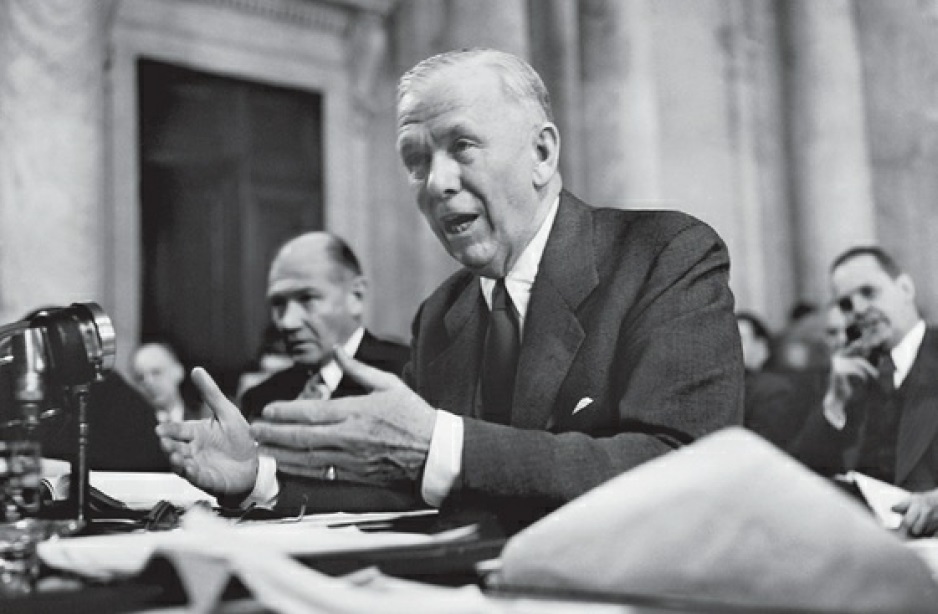 In 1939, Germany had a GDP of nearly $400 billion, having surpassed the USSR to make it the second most powerful economy in the world, behind the US. In 1946, following years of war, Germany’s GDP had dropped to just $160 billion, lower than the UK and France. Food production had been reduced by 50 percent, housing stock by 20 percent, and industrial output by 33 percent.

Yet by 1955, German GDP was back near $400 billion, once again overcoming that of the UK. Industrial output had quadrupled by 1958 with a steady rate of growth of about 8 percent each year throughout the 50s.

This “economic miracle” is commonly referred to as die Wirtschaftswunder. But how did Germany go from rubble to riches in just a decade while neutral countries like Spain merely treaded economic water? If you ask your average American history student, they will say the Marshall Plan, of course!

The Marshall Plan as Propaganda

Unfortunately, the ubiquity of the myth that the Marshall Plan rebuilt Germany is proof that state-controlled education favors propaganda over economic literacy. Despite the fact that most modern historians don’t give the Marshall Plan much credit at all for rebuilding Germany and attribute to it less than 5 percent of Germany’s national income during its implementation, standard history textbooks still place it at the forefront of the discussion about post-war reconstruction.

Consider this section from McDougal Littell’s World History (p. 968), the textbook I was given in high school:

“This assistance program, called the Marshall Plan, would provide food, machinery, and other materials to rebuild Western Europe. As Congress debated the $12.5 billion program in 1948, the Communists seized power in Czechoslovakia. Congress immediately voted approval. The plan was a spectacular success.”

Of course, the textbook makes no mention of the actual cause of the Wirtschaftwunder: sound economic policy. That’s because, for the state, the Marshall Plan makes great statist mythology.

Not only is it frequently brought up to justify the United States getting involved in foreign conflicts, but it simply gives support for central planning. Just look at the economic miracle the government was able to create with easy credit, they say.

And of course, admitting that the billions of dollars pumped into Germany after WWII accomplished next to nothing, especially when compared to something as simple as sound money, would be tantamount to admitting that the government spends most of its time making itself needed when it isn’t and thereby doing little besides getting in the way.

The Inconvenient Truth of Currency Reform

You are unlikely to find the real cause of the Wirtschaftwunder mentioned in any high school history textbook, but here is what it was. In 1948, the economist and future Chancellor of West Germany Ludwig Erhard was chosen by the occupational Bizonal Economic Council as their Director of Economics. He went on to liberalize the West German economy with a number of good policies, the most important being currency reform.

The currency in Germany immediately after WWII was still the Reichsmark, and both the Nazis and then the occupying Soviet authorities had increased the amount in circulation significantly. As a result, by 1948 the Reichsmark was so worthless that people had turned to using cigarettes and coffee as money.

To give people a true store of value so that they could calculate economic costs accurately, assess risk and invest in the future, Erhard created the Deutsche Mark, West Germany’s new currency. Like ripping off a bandaid, he decreased the money supply by 93 percent overnight.
It’s also worth noting that while Erhard, following his school of Ordoliberalism, did form a central bank, it was at least designed independent from the government and followed a hard-money policy (preserving a stable amount of money) through the length of the Wirtschaftswunder. In fact, the original Bank Deutsche Länder was rather limited in scope until it was reorganized as the considerably more centralized Bundesbank in 1957, incidentally when Germany’s economic miracle began to lose steam.

Other notable liberal policies instituted by Erhard included removing all price controls and lowering taxes from the Nazis’ absurd 85 percent to 18 percent. The American occupational authorities opposed these reforms, but Erhard went through with them anyway. This liberalization had an immediate effect. The black market disappeared almost overnight, and in one year, industrial output almost doubled.

Perhaps most poignantly, unemployment dropped from more than 10 percent to around 1 percent by the end of the 1950s. Normally the government tries to justify currency manipulation as a means to eliminate unemployment, but the Wirtschaftwunder is evidence that sound money does the job far better.

So what can the truth of the Wirtschaftswunder teach us, other than that the government prefers promoting itself over real economic education? As politicians increasingly destroy our economies with inflationary monetary policy while simultaneously trying to convince us that these very policies are the only way to save us, the lessons of post-war Germany only become more relevant.

What I’ve always taken away primarily is the simplicity and speed of the Wirtschaftswunder. While the Federal Reserve debates endlessly whether to raise rates and how much, our economy becomes increasingly weighed down by miscalculated investments, rising prices, and stagnating wages. The wealthy regulators with their hands on the money printer may make these seem like complicated problems, but look at how the post-apocalyptic economy of post-war Germany healed in mere months under sound money, deregulation, and low taxes.

Will our politicians and central bankers ever admit such a simple cure? As long as they can hide it from us, I doubt it.