Where The World Regulates Cryptocurrency

Where The World Regulates Cryptocurrency

Some countries declare Bitcoin to be official legal tender while others announce outright bans on cryptocurrency. The world map below, created by Statista's Katharina Buchholz - based on data collected by the Law Library of the U.S. Congress - shows where countries have been trying to stop the cryptocurrency hype and where crypto has been given more or less free reign. 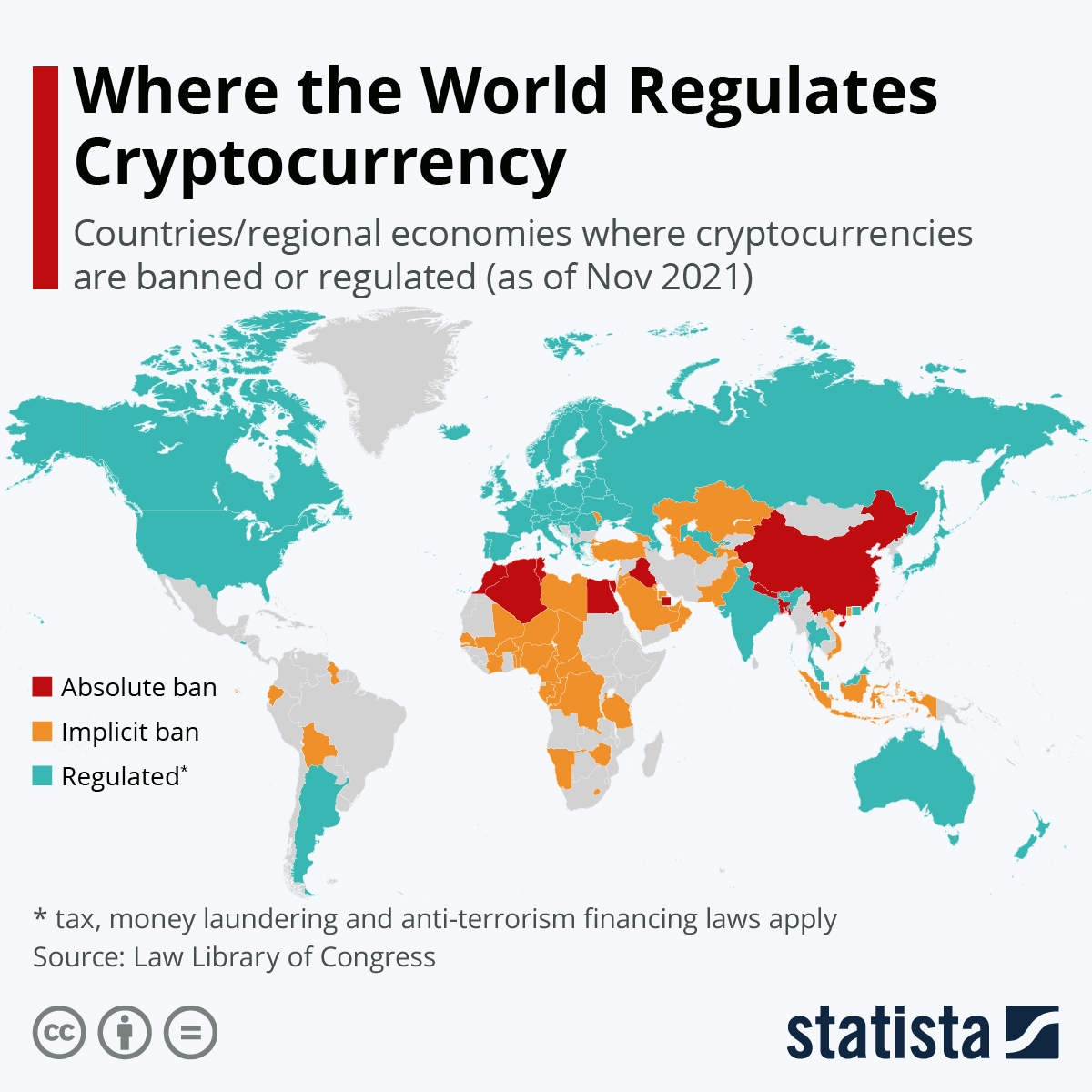 One example of a country embracing cryptocurrency is El Salvador, where Bitcoin was declared an official currency in September of 2021 by populist president Nayib Bukele. The country also taxes and otherwise regulates cryptocurrency. El Salvador is in a special position because it does not have its own currency and instead relies on the U.S. dollar, like some other countries in the region.

Other countries which are applying laws to regulate digital currencies probably wouldn't go as far as El Salvador. Rather, these places - which are most typically developed countries - have been investing in projects to launch their own central bank digital currencies. This is arguably a very different approach to using blockchain technology than that of original cryptocurrencies, which are explicitly independent of any state control, but can be very volatile as a result. Among those exploring the concept are the U.S., European countries, Russia and Australia. India and Thailand, both of which are also broadly regulating cryptocurrency, already have more concrete plans to issue their own digital currencies.

Ukraine was also among the countries which have been regulating cryptocurrency, but the nation went one step further on Wednesday when legislating a framework for the cryptocurrency industry in the country. The nation made the move after it received donations in crypto following its invasion by Russia. Rules like having to register or acquire a license for a crypto exchange also exist in the EU, the UK, Canada, the U.S., Mexico, Chile, Japan and Korea, among others.

China was the first major economy to start issuing its national currency on the blockchain in early 2021. The country has taken a more extreme approach to regulating cryptocurrency by issuing an absolute ban on it. According to the Law Library of Congress, nine countries had so far taken this measure, while many more were implicitly banning the use of cryptocurrency through their other laws. This practice was most common in Africa, the Middle East and Asia.