‘Inflation Tax’ Will Cost Families This Many Thousands This Year, Bloomberg Analysis Warns 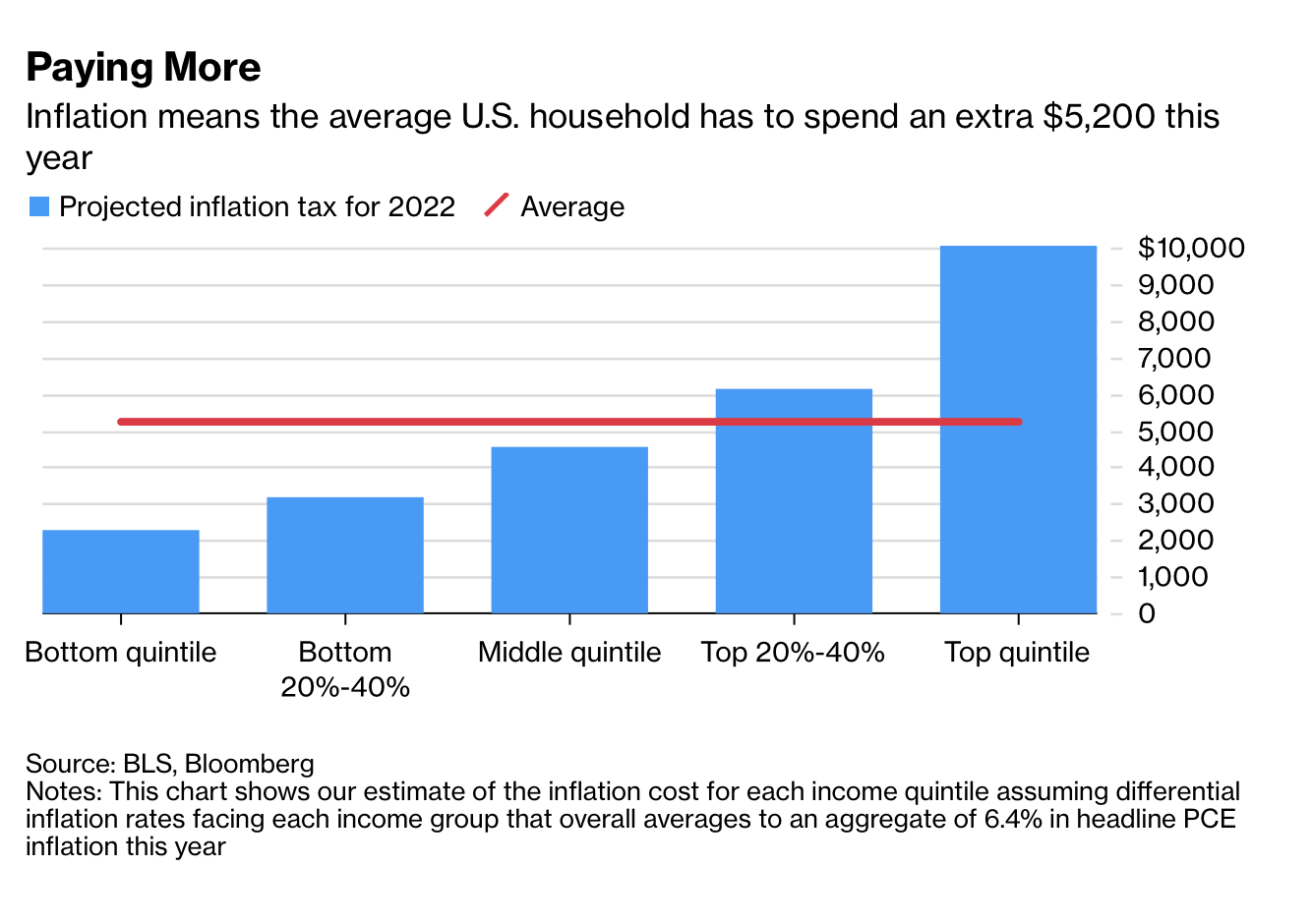 Another day, another alarming inflation metric. We just got the numbers for the Personal Consumption Expenditures index (PCE), the Federal Reserve’s favored inflation metric, and they’re jaw-dropping. The PCE hit a 40-year high in February, with the measured prices rising 6.4% year-over-year.

What does this mean in real life?

A new Bloomberg analysis sheds some light on this key question. It finds that this year, inflation will cost the typical US household an additional $5,200 just to afford the same goods as last year. That’s $433 a month taken out of the average family’s budget.

Why is this happening?

In the mainstream media and among progressive economists, price inflation is often portrayed as an abstract force beyond our control, like the weather. But in reality, it is directly caused by reckless government policies.

The Federal Reserve decided to “stimulate” the economy amid the pandemic by (digitally) printing trillions of new dollars out of thin air. But scarcity and trade-offs are the defining reality of economic life, so their actions had consequences. By putting trillions of new dollars out into the economy, they made the dollars Americans currently held less valuable—inflating away our savings and wealth.

Just consider the below graph, which shows the number of US dollars in circulation over the last 5 years:

It ran up massive, multi-trillion-dollar budget deficits—at the very time various levels of government were restricting economic life and constraining supply. Through trillions in debt, Congress signed us up for grave economic costs in the future in order to artificially inflate consumer demand in the short term, which doesn’t work as “stimulus” to begin with.

Yet when you do this at the very same time you are constraining the economy and hindering the supply chain, it’s inevitable that price levels overall will surge as demand so far outpaces supply.

So, no, inflation isn’t an abstract phenomenon. But it is, essentially, an indirect tax on everyday Americans.

Inflation will cost the average US family an extra $5200 this year just to maintain their same life.

That's a tax on Americans, thanks to the Federal Reserve's money-printing & the federal government's fiscal recklessness.

Inflation is a ‘Stealth Tax’

What is a tax, after all, other than a cost forcibly imposed on the citizenry to finance/enable government expenditures? And that also perfectly describes the inflation currently hitting Americans in the wallet.

The government wanted to engage in reckless money-printing and spending without bearing the political brunt of directly raising peoples’ taxes. As a result, our savings were inflated away.

When the money printer goes "brr," your wallet goes "ouch!"

That’s the textbook definition of a “stealth tax.”

“By a continuing process of inflation, government can confiscate, secretly and unobserved, an important part of the wealth of their citizens,” Keynes once said.

Keynes found agreement on this point from across the spectrum. Nobel-Prize-winning free-market economist Milton Friedman similarly quipped that “inflation is taxation without legislation.”

“Inflation” isn’t really what will cost families $5,200 extra this year. The government is what’s truly imposing that burden upon us all.