A federal judge ruled Monday that North Carolina's beer bureaucrats violated the Constitution when they tried to ban a beer because they disliked the art on the label.

The offending label was wrapped around bottles of Maryland-based Flying Dog Brewery's Freezin' Season Winter Ale, and appears to show a tiny appendage between the legs of a Ralph Steadman cartoon character. Last year, the North Carolina Alcoholic Beverage Control (ABC) Commission told Flying Dog that the beer could not be sold in the state due to the "inappropriate" and "in bad taste" label design.

But there's no accounting for taste in the First Amendment—indeed, the most fundamental aspect of the constitutional protections afforded to free speech is that government officials can't prohibit expression or art simply because they dislike it.

On Monday, Judge Terrence Boyle confirmed as much, writing that prior court rulings regarding commercial speech "should have placed any reasonable state liquor commissioner on notice that banning a beer label based on its content would violate the First Amendment."

"The challenged regulation is facially unconstitutional because it is overbroad and otherwise not narrowly tailored to achieve North Carolina's proffered substantial interest," Boyle concluded.

Jim Caruso, CEO of Flying Dog, calls the ruling "a resounding victory for the First Amendment."

"With the First Amendment seemingly under attack from all sides, it is heartening to see court decisions like this that protect the freedoms that it embodies," says Caruso, who is a financial supporter of Reason Foundation, the nonprofit that publishes this website. "The First Amendment is the last defense against authoritarian and arbitrary government and it must be protected against any and all threats."

A surprising amount of the legal back-and-forth in the case revolved around the question of whether the cartoon figure on the label is, in fact, sporting a tiny member between its legs. While the label "shows a small protrusion that is where one would expect to find a penis on most male humans," it is "otherwise not at all identifiable as one. There are no constituent parts of a penis, no testicles, and it is not engorged. It is a small nub that merely suggests a penis. It is certainly not sexually explicit," the brewery's lawyers wrote in court documents.

At one point, Flying Dog's lawyers entered a "super-zoom of the 'penis'" into the court record. 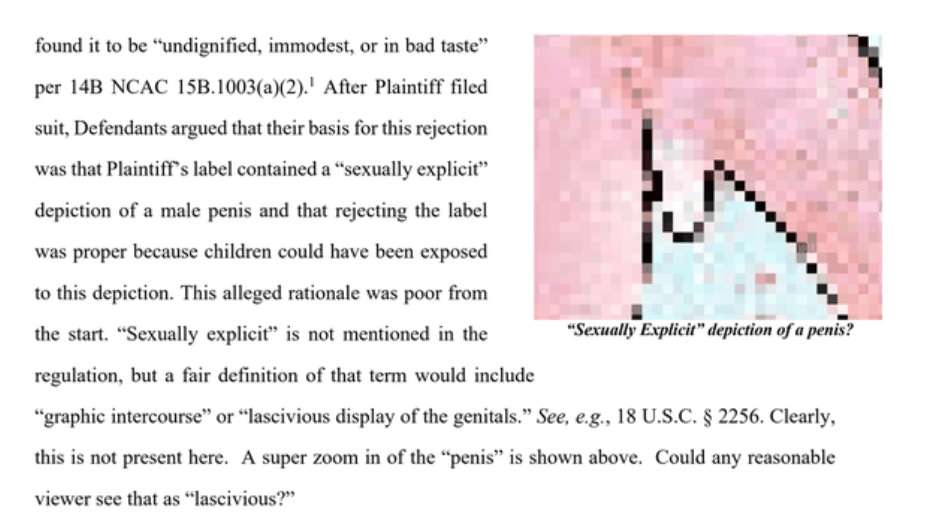 "It may not have all the bells and whistles, but it's a penis," attorneys for the North Carolina ABC wrote—yes, really—in response. 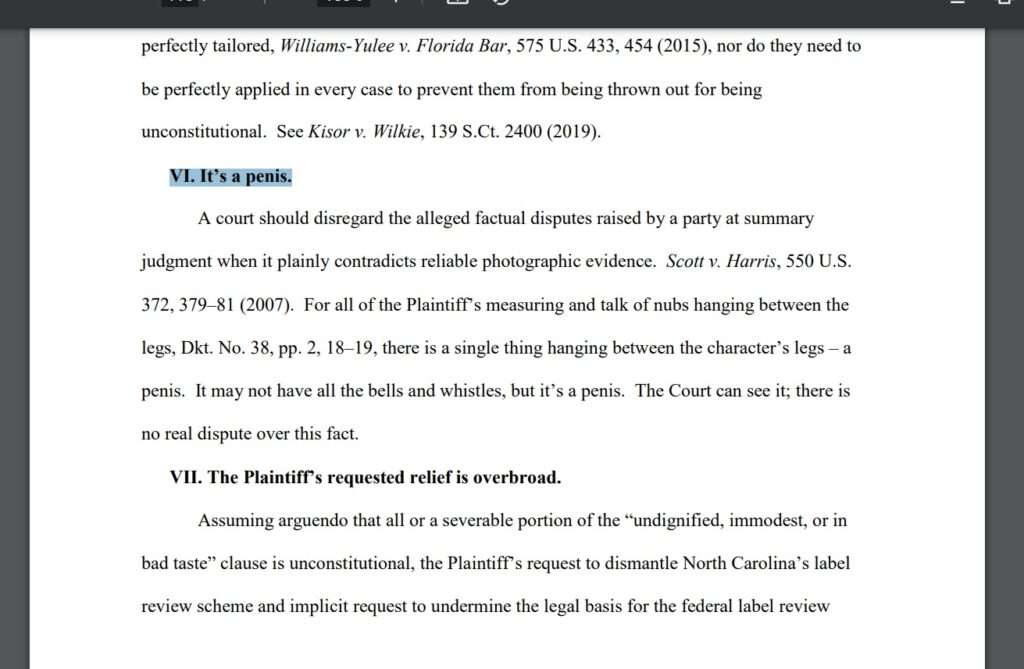 But Boyle noted that the state's rules are, in fact, far more expansive than merely policing sexual or pseudo-sexual content. And the judge sided with Flying Dog's contention that those rules are not only vast but also inconsistently applied.

As Reason has previously covered, the North Carolina ABC has blacklisted about 230 beer and wine brands since 2002 for having labels or names that offended the board's sensibilities. Ironically, the North Carolina ABC reportedly told Utah-based Wasatch Brewery that its "Polygamy Porter" could not be sold in the state because "polygamy is illegal." But the board also banned a beer named "Kissing Cousins" despite the fact that it is literally legal to marry your first cousin in North Carolina.

Boyle concluded that the North Carolina ABC's rules prohibiting speech that regulators deem "undignified, immodest, or in bad taste" could give the state "vast" power over the type of advertising allowed.

"Indeed, the Supreme Court has recently reaffirmed 'the bedrock First Amendment
principle [that] Speech may not be banned on the ground that it expresses ideas that offend,'" wrote Boyle, citing the landmark 2017 Supreme Court ruling Matal v. Tam. In that case, the court found that that the federal Patent and Trademark Office (PTO) could not prevent all-Asian dance-rock band The Slants from trademarking its name, even if the name violated PTO rules against disparaging "persons, living or dead, institutions, beliefs, or national symbols, or bring them into contempt, or disrepute." Restrictions on commercial speech must serve a "substantial" government interest and must be "narrowly drawn," the court held in Matal.

It's obviously silly for alcohol regulators to be concerned with what images appear on beer labels, but Monday's ruling leaves no doubt that it's unconstitutional too.

The post The First Amendment Protects the Right To Put a Tiny Penis on a Beer Label appeared first on Reason.com.