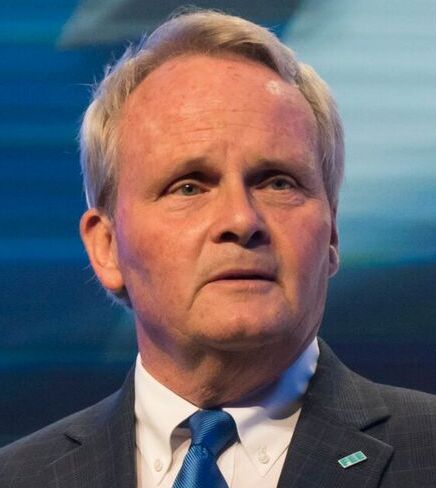 Lawrence W. Reed, FEE’s president emeritus who served as the organization’s president from 2008-2019, will be honored at forthcoming ceremonies in Poland’s capital of Warsaw. He will receive the Grand Cross of the Order of Merit of the Republic of Poland, which is the highest honor bestowed by Poland upon a foreigner.

US President Ronald Reagan and British intellectual Sir Roger Scruton are among its past recipients. Poland’s president, Mr. Andrzej Duda, made the announcement official in a recent decree.

“This is quite a surprise,” Reed said. “Words cannot fully convey the depth of my appreciation for this extraordinary honor. Second only to my native America, Poland holds a very special place in my heart.”

Reed has authored many articles about Poland and Polish heroes since his first of many visits to the country in November 1986, when it was still ruled by a communist dictatorship. His book, Real Heroes: Inspiring True Stories of Courage, Character and Conviction, includes several chapters on Polish heroes, including Witold Pilecki, Maria Sklodowska-Curie and Fr. Jerzy Popieluszko. A bibliography of Reed’s work on Poland, with links, appears below.

During Reed’s 1986 visit, he stayed in homes of people active in resistance to the then-communist regime, interviewing them and learning a great deal about the Polish underground. Reed was ultimately arrested, detained and expelled but since the collapse of the communists in 1989, he has visited the country and delivered speeches there many times, including at the Warsaw School of Economics and Jagiellonian University in Krakow. 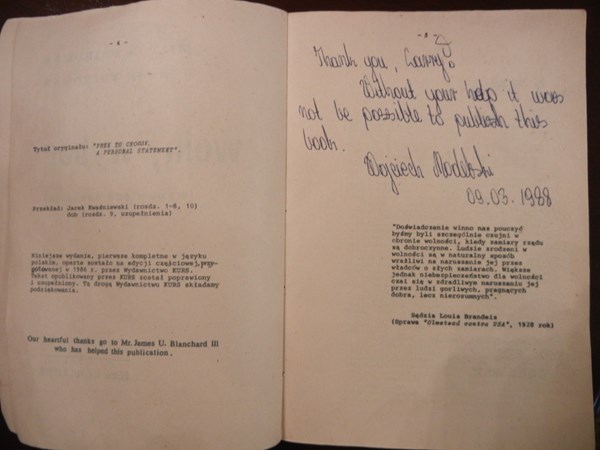 In the 1980s, Jan Rokita was active in the Polish dissident group, Freedom and Peace, one of the organizations banned for opposing the communist government at the time. Rokita arranged much of Reed’s schedule of underground meetings in 1986 and accompanied Reed during his visit. He later became a prominent leader in the Polish parliament. In response to the announcement of the award, Rokita said,

Larry became a close friend of ours in the 1980s as we bonded over a deep belief in freedom. He supported us, wrote about us in the US, and believed we would prevail. We have great gratitude for him and that is why we asked President Duda for this high Polish honor.

The statement from President Duda noted Reed’s involvement on behalf of freedom movements around the world. It reads, in part, as follows:

Lawrence Reed is author of numerous publications, as well as a leading intellectual and moral authority of anti-communist and libertarian circles in the U.S. He has been actively involved in supporting people fighting against communism—in Cambodia, Nicaragua, China, Mozambique and—above all—in Poland.

His merits in supporting the Polish anti-communist opposition in the 1980s are hard to overestimate. During the Fall of 1986 he spent a long period of time in Poland, engaging in political cooperation and making many personal friendships especially among The Freedom and Peace Movement, The Committee of Interventions and the Rule of Law of NSZZ “Solidarity” and The Editorial office of “Arka” circles. During his return trip to U.S. he was detained by the Security Service (SB) for a few hours at the Okęcie airport where he was interrogated, and afterwards all materials and publications relating to the underground activity in his possession were confiscated.

But the result of his stay in Poland were many robust and insightful publications in the U.S. describing the Polish anti-communist opposition, above all, at that time pioneering publications about The Freedom and Peace Movement (Ruch Wolność i Pokój). A robust “political report” from Poland, published in the pages of “The Freeman”, played a significant role in rallying American libertarian circles behind the Polish Underground, which was until then poorly interested in Polish issues.

Since that time Larry Reed has become a de facto ambassador of Poland within the conservative-libertarian political and intellectual community in the U.S. He initiated and funded the translation into Polish the essays of the late Milton Friedman, published in Kraków as “Wolny Wybór. Then he organized a program of translation and publication in Polish works by many key theorists of freedom and free markets: Ayn Rand, Ludwig von Mises, F. A. Hayek, etc.

Thanks to Reed’s effort the publishing house of the Foundation of Economic Education became a fountain for the promotion of Poland, her libertarian traditions and history. Among other works, his articles about the Warsaw Uprising, Marie Curie-Sklodowska and Witold Pilecki were published. In the U.S. Reed supported, both politically and financially, “Project Wounded” started by the activists of the Freedom and Peace Movement, thanks to which a group of Afghan Mujahideens wounded in fights against the Soviet army could arrive to the U.S. for treatment.

During a speech made in 2003 in the House of Representatives of the U.S., Congressman Ron Paul honored Reed, recognizing him as a “leading and tireless American champion of freedom.”

Since his first trip to Poland Larry is ideologically and emotionally tied to Poland, and her fight for freedom, a commitment lasting to this day. In a contemporary free world, Poland has few such dedicated and influential supporters and enthusiasts. For this long-term commitment to freedom and to Poland, the free Republic of Poland has yet to thank him—until now.

The date of the ceremony at which the award will be presented to Reed by President Duda at the presidential palace will be announced shortly.

In addition to his role as FEE’s president emeritus, Reed also serves FEE as its Humphreys Family Senior Fellow and Ron Manners Global Ambassador for Liberty. Author of numerous books and eBooks and some 2,000 articles, he has visited 87 countries and lectured in many of them. He blogs at www.lawrencewreed.com.

Stay tuned for a follow-up story afterwards. All of us at FEE are pleased to offer our hearty congratulations to our former president!

A Tribute to the Polish People

The Battle of Warsaw: Celebrating the Centennial of a Polish Victory

The Polish-Lithuanian Commonwealth’s Legacy of Liberty

Poles and Ukrainians: Brothers in War and in Peace

I Was a Smuggler—And I Make No Apologies For It

The World-Famous Polish Astronomer Who Was Also a Smart Economist