Federal funds intended to be used for pandemic relief efforts were used instead to pad the paychecks of government employees from coast to coast.

In San Diego, California, for example, some 9,595 county workers were awarded bonuses funded with more than $27 million in federal COVID aid, according to a Treasury Department program set up to track the $350 billion in pandemic funds distributed to state and local governments as part of the American Rescue Plan. Bonuses of $2,500 were paid to County of San Diego employees working in "detention and medical facilities" and other places where county officials deemed "COVID-19 exposure was more likely." But employees who faced no heightened risk of job-related exposure were rewarded with $1,500 bonuses as well.

In Lexington, Kentucky, public workers deemed to have "held positions and performed duties" that included a "greater risk of contracting COVID-19" were rewarded with $5,000 bonuses, according to the Treasury's records. In the suburbs of Atlanta, more than 4,400 employees of Gwinnett County, Georgia, received temporary raises ranging from 7.5 percent to 15 percent thanks to more than $11 million in federal COVID aid. And more than $13 million in federal aid flowed to 16,000 employees of Cook County, Illinois, who were awarded bonuses up to $3,000 for the work they performed during the pandemic.

In all, state and local governments have reported spending more than $872 million on so-called "premium pay" for 404,253 of their employees, according to Reason's review of the Treasury Department's data. That's in addition, of course, to the direct stimulus checks that many of those same workers likely received from the federal government.

In some cases, it seems like simply showing up to work is the only justification needed. Public workers in Erie County, New York, got more than $3 million in boosted pay because they "continued to report to work in person throughout the worst of the pandemic," the county reported to the Treasury. "Employees have continued to work through the pandemic," explains Colombia County, Wisconsin, after it decided to distribute $471,000 in relief funds to 503 employees.

And while the pandemic surely created new stress and problems for many public employees—including the potential of infection—the exact same thing is true for private-sector workers who were not rewarded for simply doing their jobs.

The widespread use of COVID relief funds to line the wallets of public employees should also raise even more questions about whether a federal bailout of state and local governments was necessary. Expected revenue shortfalls in state and local tax coffers never materialized—and many states emerged from the pandemic with surpluses instead.

States have until the end of 2024 to spend the federal aid distributed as part of the American Rescue Plan, so the totals reported so far (the Treasury's tracker has been updated to include spending through December 31 of last year) could increase.

In an analysis of the spending published last month, the Treasury notes that state and local governments spent $5 billion of their federal COVID aid on "worker support," a category that includes those bonuses along with things like unemployment payments and job training. That's the same amount of money that states and local governments reported using for actual COVID relief—a category that includes "vaccinations, testing, contact tracing, PPE, prevention in congregate facilities, medical expenses, and other public health measures." 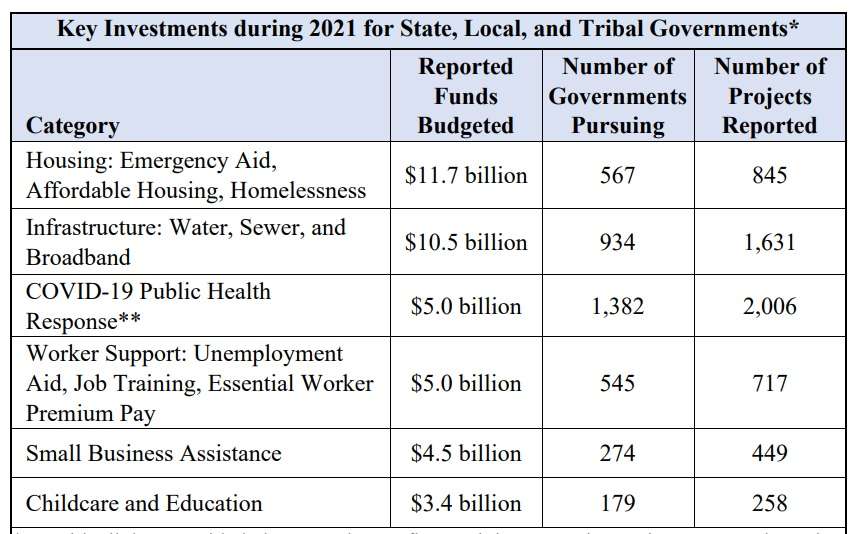 States and local governments are forbidden from using the American Rescue Fund spending to cut taxes but are allowed to plow it into parts of their budgets that have little if anything to do with the pandemic. Public sector unions have been happy to encourage some of those decisions. The Associated Press reported in July that an Oregon proposal to give public workers a $2,000 bonus was the subject of "a union lobbying campaign that included thousands of emails and hundreds of phone calls to lawmakers."

In many cases, police and prison guards have been on the front lines for getting extra pay.

In Virginia, law enforcement personnel and prison guards received $3,000 bonuses last year. That consumed more than $10 million of COVID aid and benefitted 1,905 workers, according to the Treasury's tracker. Some counties in Virginia went even further on their own. Pittsylvania County, on the state's southern border, doubled the bonus for their police officers and topped up other county employees' bank accounts too, ultimately spending more than $245,000 in pandemic relief to pay bonuses to 287 workers.

The state of Indiana gave all prison guards a one-time "hazard pay bonus" of $1,600 for working during the pandemic—at a total cost of $7.6 million. Clayton County, Georgia, reports spending more than $4.6 million on "lump-sum payments of $4,000" to police and prison guards.

And on and on. There are already 401 line items detailing "premium pay" in the Treasury's sprawling spreadsheet that breaks down the various ways state and local governments have blown through an unnecessary bailout by rewarding government workers for just doing their jobs.

The post Government Employees Got $872 Million in Bonuses Out of COVID Aid Cash appeared first on Reason.com.