Another poll finds rising support for reproductive freedom in America. The poll—largely conducted in the wake of a Supreme Court draft opinion that would overturn Roe v. Wade going public—shows that support for legal abortion is at a near-record high in the U.S.

Fifty-five percent of respondents in the most recent Gallup poll identified as pro-choice—up six percentage points from spring 2021 polling.

The poll's record-high year for pro-choice identification was 1995, when it stood at 56 percent. That year was "the only other time it has been at the current level or higher," notes Gallup.

Meanwhile, the 39 percent of respondents identifying as pro-life in this year's poll marks the lowest level of pro-life identification since 1996. 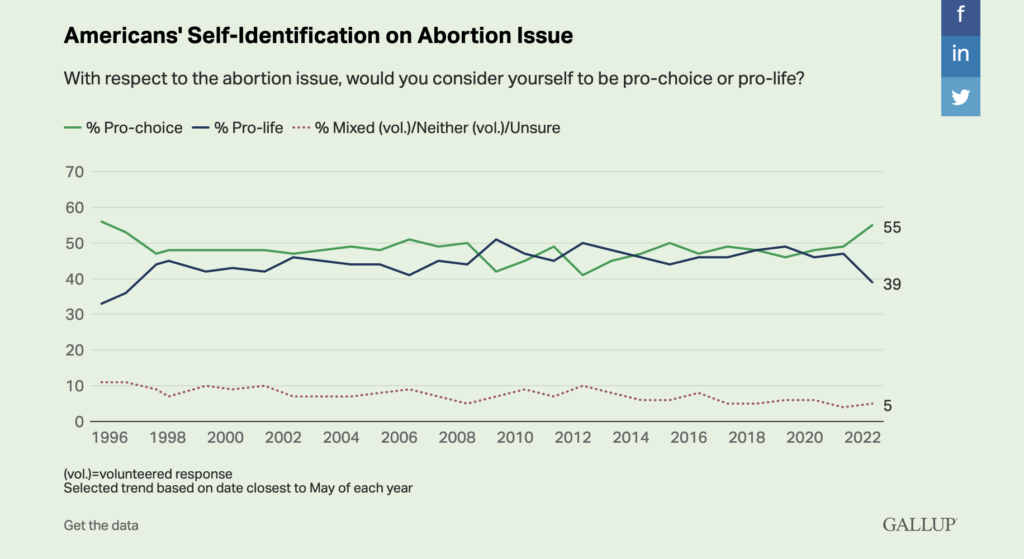 "The increase in pro-choice identification over the past year is mainly driven by Democrats; 88%, up from 70% last year, consider themselves pro-choice," notes Gallup:

The poll also shows significant increases in pro-choice identification among Democratic-leaning groups, including younger adults and women. Pro-choice identification increased by nine percentage points to 61% among women, 12 points to 67% among adults aged 18 to 34 and nine points to 58% among adults aged 35 to 54. The percentage "pro-choice" did not change significantly among Republicans, independents, men or older Americans.

The latest poll—involving 1,007 American adults—was conducted between May 2 and May 22. The leaked draft of a Supreme Court opinion upending legal protection for abortion access was first revealed on the evening of May 2.

Other measures of pro-choice sentiment in the most recent Gallup poll have also inched—or catapulted—higher.

People surveyed recently were also less likely to say that abortion should be illegal under all circumstances. This year, only 13 percent said abortion should always be illegal—down from 19 percent last year and the lowest percentage holding this position since 1995.

At the same time, the 35% wanting it legal under any circumstances is the highest in Gallup's trend by one point, after increasing slightly each of the past three years.

Michigan prisons are afraid of prisoners learning "obscure language[s]" … like Spanish. The Michigan Department of Corrections has banned both Spanish and Swahili dictionaries in the past year. "If certain prisoners all decided to learn a very obscure language, they would be able to then speak freely in front of staff and others about introducing contraband or assaulting staff or assaulting another prisoner," prisons spokesperson Chris Gautz told NPR. "When it's in a language that we don't have the ability to read ourselves and understand exactly what it is that we're looking for, we're not able to allow it in."

Upsolve narrowly challenged New York's UPL law, as applied to their program, on First Amendment grounds. And last week, in a first‐​of‐​its‐​kind decision, a federal judge agreed and blocked New York from enforcing its UPL laws against Upsolve's volunteers. The opinion is not just an enormous win for expanding access to justice. It is also a precedent that could serve as a model for challenges to other overbroad regulations of so‐​called "speaking professions."

In the opinion ruling for Upsolve, Judge Paul Crotty of the Southern District of New York recognized that Upsolve volunteers want to provide "pure verbal speech." As Judge Crotty explained, Upsolve volunteers did not want to "file pleadings, represent clients in court, or handle client funds," all activities that can more plausibly be described as a mixture of speech and conduct. Instead, Upsolve volunteers will only give advice outside a courtroom setting. And in Holder v. Humanitarian Law Project (2010) the Supreme Court "unanimously concluded [that] the giving of expert advice was speech, not conduct."

.@RepThomasMassie proposes an amendment that would allow 18-year-olds who register for the draft to buy guns.

Massie points out that they'll send them to war but not let them buy a gun. pic.twitter.com/0u0J4jPwjQ

• The new conservative culture war battles are "distinctly different from the culture wars of the late 20th century, and it reflects a broad shift in conservatism's priorities and worldview," suggests National Review fellow Nate Hochman in The New York Times. "The conservative political project is no longer specifically Christian. That may seem strange to say at a moment when a mostly Catholic conservative majority on the Supreme Court appears poised to overturn Roe v. Wade. But a reversal of the landmark 1973 ruling would be more of a last gasp than a sign of strength for the religious right."

• "Prosecutors in Nashville, Tennessee; DeKalb County, Georgia; Fairfax County, Virginia; and Durham County, North Carolina have all said abortion-related prosecutions won't be a high priority for their departments, or they directly stated that they will not enforce state bans," reports Axios.

• Ilya Shapiro is starting as a senior lecturer at Georgetown University, following a four-month investigation by the school's human-resources department and Office of  Institutional Diversity, Equity and Affirmative Action over Shapiro's tweet criticizing President Joe Biden's decision to limit his Supreme Court nominee pool to women of color.

• A mask mandate returns to parts of the Bay Area.

• Homeland Security is once again rounding up runaway teens and tweens and portraying it as a brave anti-sex trafficking mission:

Every few months law enforcement claims to have "saved" dozens of children from sex trafficking, & only months later does someone track down the details and we find out that it was just that they "found" a bunch of kids who ran away from problems at home. https://t.co/2dZQfjqhG0

The post Pro-Life Identification Falls to Lowest Level Since 1996 appeared first on Reason.com.