Reactions to Lyin’ Loser Liz Cheney’s Loss Come in Swiftly . . And They Are 🔥🔥🔥

RINO Neocon Never-Trumper Liz Cheney, formerly a respected Republican until she allowed her Stage 4 case of Trump Derangement Syndrome to push her into bed with the Democrat-Communist Party and the January 6 “Insurrection” hoax, lost her Republican primary Tuesday night in Wyoming.

And it wasn’t even close.

Despite the highly sleazy scheme of attempting to convince Democrats to switch parties temporarily to vote in a Republican primary because of “Orange Man Bad” or something, Liz Cheney, who the Republican establishment had bankrolled, including fellow warmongers George W. Bush and Karl Rove, got crushed by over 35 points with 96% reporting. 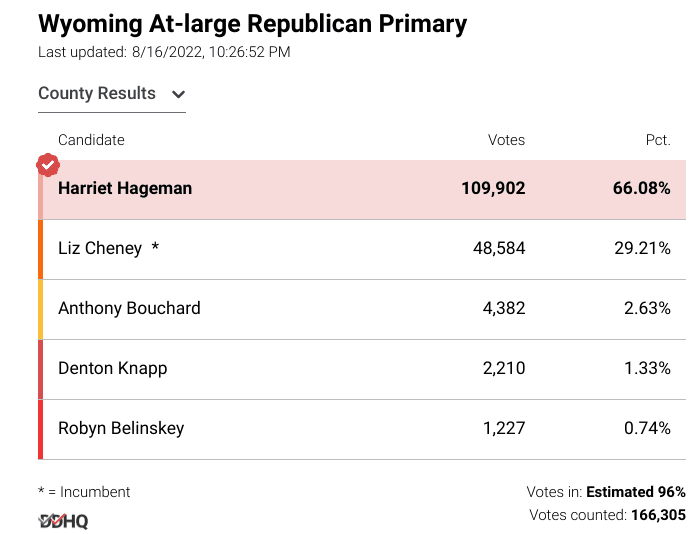 The political establishment in BOTH parties, the “uniparty” as it’s called because of the tendency for both parties to be controlled by the military-industrial complex, was so desperate to push pro-war Cheney to victory that they even rolled out disgraced former Democrat Senator Al Franken, who had to resign in shame after being outed as a serial groper.

As one might expect, the reactions to hated Liz Cheney’s historic thrashing came in quick and harsh:

Donald Trump, Jr. hilariously trolled Cheney, whose family is famous for pretending to “represent” Wyoming while being entrenched in the DC swamp for decades:

Bye bye @Liz_Cheney. On the bright side at least you won’t have to pretend to be from Wyoming anymore.
pic.twitter.com/DMcj3ua42d

A clear message is being sent about what the Republican Party needs to be.

Senator Rand Paul, no fan of the endless and worthless wars the Cheney family has supported over the years, weighed in:

Few people in Washington have been as wrong and damaging on foreign policy as Liz Cheney. Congratulations to @HagemanforWY on her victory tonight. I look forward to working with an advocate for liberty as the next Congresswoman from Wyoming. Bye Liz.

And while some speculated that Liz’s next stop could be MSNBC, where RINO turncoats continue their careers of grift after being rejected by voters . . .

. . . it should be noted that Cheney’s comparing herself to Abe Lincoln was more than just delusional virtue-signaling, it could very well signal her run for president in 2024 just to spite President Trump, an outlandish proposition that she has refused to deny.

Todd Starnes, former Fox Newser and host of the Todd Starnes Show, predicted Cheney’s next potential career should she realize she has zero chance of being elected president:

Perhaps Mrs. Cheney could lead financial seminars teaching Americans how a public servant can turn a $174,000 salary into a $14 million fortune.

Judicial Watch’s Tom Fitton is not giving up hope on Liz, dreaming that there’s still time for her to “do the right thing”. . .

.@RepLizCheney should quit the Pelosi rump Jan 6 committee, expose its corruption, and apologize for her participation in its abuses, smears and lies. Never too late for her to do the right thing.

And of course, there just HAS to be this meme:

Florida congressional candidate and conservative firebrand Laura Loomer, considered the most banned woman in the world on social media, perhaps said it best with this statement:

But as you might imagine, the best reaction may have come from President Trump himself, whose victory lap was well-deserved considering his unabashed support for Cheney’s challenger:

“Congratulations to Harriet Hageman on her great and very decisive WIN in Wyoming,” Trump wrote. “This is a wonderful result for America, and a complete rebuke of the Unselect Committee of political Hacks and Thugs.”

“Liz Cheney should be ashamed of herself, the way she acted, and her spiteful, sanctimonious words and actions towards others,” he continued. “Now she can finally disappear into the depths of political oblivion where I am sure, she will be much happier than she is right now. Thank you WYOMING!”

The post Reactions to Lyin’ Loser Liz Cheney’s Loss Come in Swiftly . . And They Are 🔥🔥🔥 appeared first on 🔔 The Liberty Daily.