On January 5, 2023, at around 11:30 p.m., a 46-year-old diner-patron was sitting in a booth at the southwest Houston's El Ranchito Taqueria #4 when a masked robber began pacing around the restaurant demanding money from the patrons at gunpoint. As the robber walked past the patron the patron pulled out a handgun. The patron then shot and killed the robber, who has been identified as 30-year-old Eric Eugene Washington.

The handgun later turned out to be a fake (the shooter can be seen throwing it against a wall in apparent disgust after the shooting). Yet there can be little question that the employees and customers, some of whom crawled under a table desperately seeking cover, had every reason to fear they would be killed or seriously injured that day. According to the as-of-yet unnamed shooter's attorney, "[i]n fear of his life and his friend's life [the shooter] acted to protect everyone in the restaurant." The attorney further accurately commented that in Texas, "a shooting is justified in self-defense, defense of others and in defense of property."

A Texas Grand Jury is now reportedly considering whether that shooter's conduct qualifies as justified self-defense under Texas law. And although the so-called "smart money" understandably is on the prosecutor's office not charging the shooter, his situation is perhaps not as entirely clear-cut as it may at first blush appear.

A January 10, 2023, Washington Post article describes the shooting this way:

The customer with the gun had thrown cash onto the floor as the intruder walked by his booth, collecting money from several patrons. When the attempted robber came back by the booth, walking toward the front door at the restaurant, the customer pulled out his gun and fired.

Then, after Washington fell to the ground, the customer fired four more times, walking toward his body.

He fired the ninth and final shot standing close to the top half of Washington's body, the video shows.

[Note that although there has been some reporting that the robber was shot as he was "leaving the restaurant" or was "headed towards the door," the surveillance video does not confirm these claims of fact.]

Unsurprisingly, the one thing that is crystal clear is that different commentators have very different perceptions of the shooter; some outlets describe him as a Bernhard Goetz-style "vigilante," while others hail him as a "hero."

Much has been written on Texas' stand-your-ground/no retreat and castle-doctrine provisions embedded in Texas Penal Code §9.31 (governing the justified use of non-deadly force) and §9.32 (governing the justified use of deadly force). These enhanced protections for law-abiding citizens, however, will likely not feature heavily in this case. Instead, the outcome, here, will likely be governed by a mix of fairly standard self-defense law, combined with a healthy dose of prosecutorial discretion.

A person is justified in using deadly force against another … when and to the degree the actor reasonably believes the deadly force is immediately necessary … [1] to protect the actor against the other's use or attempted use of unlawful deadly force [or 2] to prevent the other's imminent commission of robbery … or aggravated robbery.

[Note that, per Texas Penal Code § 9.01(3), "deadly force" encompasses serious bodily injury]. These provisions of Texas' self-defense laws generally track the laws in other U.S. states. They are focused on a defender deploying deadly force to neutralize a deadly threat. Intentionally killing an attacker after the threat is neutralized, on the other hand, exceeds what the law allows, tends to fall more squarely in the punishment or revenge buckets, and can result in separate criminal charges, up to and including murder.

Defense of Others. Texas Penal Code § 9.33 provides that:

Defense of Property. Texas Penal Code § 9.42, in turn, provides in relevant part that:

A person is justified in using deadly force against another to protect … tangible, movable property [including cash and wallets] … when and to the degree he reasonably believes the deadly force is immediately necessary … to prevent the other's imminent commission of robbery [or] aggravated robbery …;  or … to prevent the other who is fleeing immediately after committing robbery [or] aggravated robbery … from escaping with the property ….

How Becoming an Unjustified Threat Creates a "Gap" in the Attacker's Otherwise Inviolable Personal Domain. In past writings, one way I have tried to conceptualize how Texas-style deadly self-preferential force works is to start with the baseline assumption that, all other things being equal, we have an inviolable personal domain that protects us from unjustified physical assault. But with an armed robber all other things are decidedly unequal. By becoming an unjustified deadly threat to others, the attacker creates an opening, or gap, in his right not to be killed or otherwise physically injured. That gap remains open while the attacker poses the unjustified deadly threat. This gap, however, closes as soon as the attacker no longer poses such a threat.

So, the key factual question here, as in almost all claimed self-defense cases, is whether, (1) at the time (2) each instance of deadly force was deployed (that is, each time the shooter pulled the trigger), (3) a reasonable person would conclude that the attacker posed an unjustified threat (4) of death or serious bodily injury.

Self-Defense and Defense of Others. The robber's gun turned out to be a plastic replica. Nevertheless, a fact-finder applying Texas Penal Code § 9.32 will almost certainly conclude that it was objectively reasonable for the shooter, at least when he pulled his gun and fired his first volley of four shots, to believe that the robber posed a real and present ("immediate") threat to both the shooter and the other patrons (Texas Penal Code § 9.33 covers deadly force to protect third persons). Indeed, the panicked reaction of the patrons serves to confirm that they for good reason perceived the robber's threat as very real and very present.

As we know, however, this does not end the inquiry. Let's take a closer look at how the shooter's defensive conduct played out, in each case asking ourselves whether the deadly defensive conduct was immediately necessary at the time (and each time) the shooter pulled the trigger:

The first four shots. As noted, the first four shots fired at the robber in close succession while the robber had his back turned to the shooter are likely uncontroversial (there, after all, are no Marquess of Queensberry Rules requiring fair play when defending your life and the lives of others against an armed, morally culpable robber). 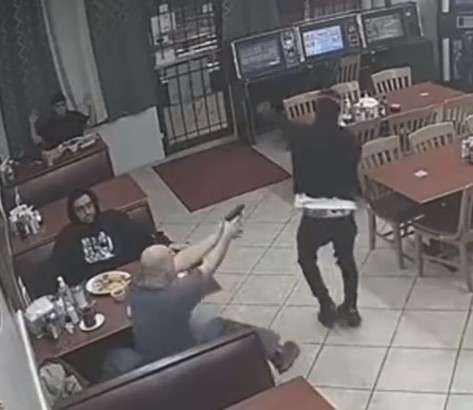 A competent defense attorney will, therefore, be able to make a persuasive case that the shooter could not reasonably tell the extent to which the threat posed by the robber was, in fact, fully neutralized. 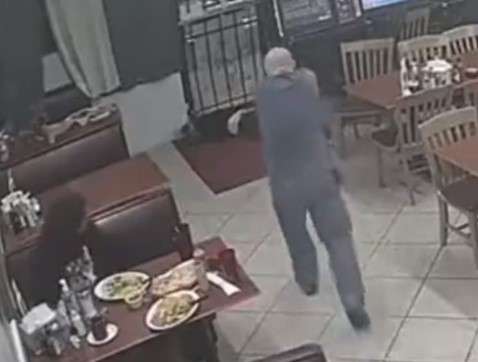 The eighth shot. By the time the shooter pulls the trigger an eighth time the shooter had walked up to the downed robber and is standing over him (the shooter basically discharged a second succession of shots while walking, with the eight shot being his last) . The shooter then appears to aim directly at the robber's head and pulls the trigger. To some observers this shot may look more like a coup de grâce or kill shot than an effort to neutralize a present and deadly threat. 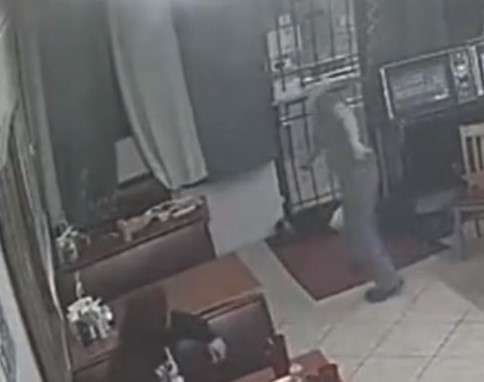 The ninth (and final) shot. This is where begin to get a bit more dicey for the shooter.

More specifically, the video shows the shooter leaning over the downed robber to retrieve the handgun that the robber dropped when he collapsed. That handgun had skittered across the tile floor and was laying a few feet away. The shooter has the robber's gun in his left hand, stands up, and while stepping back delivers another apparent additional head shot at close range. Notably, and by my calculations, the shooter makes this decision to unload an additional bullet some four seconds after the eighth shot.

An additional question that is not answerable until the forensic examination of the body is whether the medical examiner can pinpoint the shot or combination of shots that ultimately caused the robber's death (was it the eighth shot, the ninth shot, or some combination of shots?). If it turns out that, say, the eighth or ninth shot missed the robber's head, or that the robber had already succumbed to the first seven shots, then this issue likely becomes moot even if the shooter exceeded the bounds of self-defense (though a very aggressive prosecutor may of course consider bringing a Title 4 attempted murder charge where factual impossibility is irrelevant, see, e.g., Chen v. State, 42 S.W.3d 926, 930 (Tex. Crim. App. 2001)—though this would be an exceptional—and exceptionally unlikely— stretch). 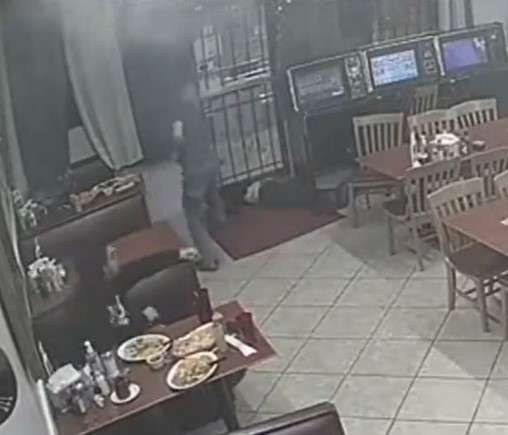 In the final analysis….

There is little basis to question the shooter's initial decision to deploy deadly force against the legally and morally culpable robber. The only potential issue for the shooter is whether prosecutors and jurors, appreciating the exigency of the circumstances, will agree that the shooter's discharge of bullets eight and nine into the downed robber were "immediately necessary" to neutralize a deadly threat posed by the apparently incapacitated robber. And as far as the prosecutors go, the cards will be stacked against a prosecutor, especially one in Texas, wanting to exercise prosecutorial discretion in favor of indicting a shooter who without question stopped an ongoing aggravated robbery and who is hailed a hero among broad swaths of the public. Additional facts—as well as factual claims—will no doubt emerge that may change the complexion of this situation. But for now, it is safe to say that we are once again confronted with a situation where the facts are a bit messier and the outcome somewhat less certain than they might at first blush appear.