The San Francisco PD has released a video of the 2 a.m. Paul Pelosi hammer attack by David DePape.

Fast forward to around 30 seconds.

Tesla shares have continued to move sharply higher since the company’s earnings report this week, with shares now over 70% higher than recent lows …

A Tale Of Two FICOs: As Discover Braces For Middle-Class Doom, AmEx Explodes As The Rich Splurge

A Tale Of Two FICOs: As Discover Braces For Middle-Class Doom, AmEx Explodes As The Rich Splurge

For a striking glimpse into the divergence between the worlds of the haves (i.e., the “top 1%”) and the have nots (everyone else), look no fur…

During an event in Springfield, Virginia, Joe Biden joked about people thinking he was “stupid” before …

A Dollar Collapse Is Now In Motion, Saudi Arabia Signals The End Of ‘Petro’ Status

A Dollar Collapse Is Now In Motion, Saudi Arabia Signals The End Of ‘Petro’ Status

Authored by Brandon Smith via Alt-Market.us,

The decline of a currency’s world reserve status is often a long process rife with denials. There are numerous…

“Flaming Dumpster”: Musk May Need To ‘Tear Down’ Twitter Code And ‘Start From Scratch’

“Flaming Dumpster”: Musk May Need To ‘Tear Down’ Twitter Code And ‘Start From Scratch’

By Josh Owens of Oilprice.com,

For those wondering why money-managing entertainer, Anthony Scaramucci, who briefly played Donald Trump spokesman, before aggressively and hilario…

“The Bot Is Out There. It Doesn’t Feel Pity, Or Remorse, Or Fear, And It Absolutely Will Not Stop Until Your Job Is Dead”

“The Bot Is Out There. It Doesn’t Feel Pity, Or Remorse, Or Fear, And It Absolutely Will Not Stop Until Your Job Is Dead”

By Michael Every of Rabobank

The most important aspect of the University of Michigan sentiment survey continues to be the inflation expectations and it plunged to 3.90% (for the next year) – the lowest sinc…

On Tuesday, German Foreign Minister Annalena Baerbock ignited a firestorm of debate when she stated that Western allies are fighting a w…

Senator Rand Paul warned Wednesday that over classification of information is being used to avoid oversight and institute cover ups, such as regarding the origins of COVID. 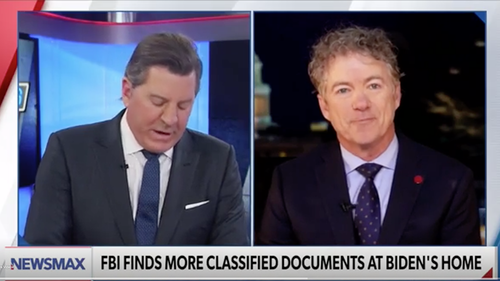 Appearing on Newsmax TV’s “Eric Bolling The Balance,” Paul explained “I think there’s an overclassification problem here. Everything’s classified. And in all likelihood, what we’ll find is this is not some sort of organized scheme to have the secrets to the nuclear weapon in [Biden’s] Corvette. I think it’s more likely than not that we’ve classified so many documents that it’s hard to find documents that are not classified.”

He continued, “The one problem with classifying so much is that there is, right now, to my knowledge, pretty good information out there in the intelligence community about the virus originating from the lab in China, and yet they classify it to try to prohibit people [like] me giving you the information that we already know that this came from a lab. And so this is a real problem.”

“We need to allow less classification so the American people can understand more about what’s going on with their government,” Paul urged.

Paul further noted that when President Trump was found to have some documents, “the left-wing media acted as if oh, these are the Manhattan Project. This is the secrets to the nuclear weapon… Really, most of the stuff we see is not really that secret. But it’s all stamped that way.”

“The intelligence community does this so they have more power and we have less power,” the Senator continued, adding “I have long argued that Congress needs to know more and the American people need to know more about what the CIA does, what the FBI does. Because we can’t oversee them, we can’t have oversight and reform if we don’t know what they’re doing.”

“They avoid oversight by classifying things, and often there’s a policy decision like, for example, with COVID, we need to know if COVID came from a lab so we can prevent this from happening again. Some of this is being stymied by the intelligence agencies classifying things that need to be declassified,” Paul further asserted.

Paul has previously labeled the subterfuge over the coronavirus lab leak as “the biggest coverup in the history of science,” and has vowed to continue to expose the origins of the pandemic and uncover a paper trail that he is positive will lead back to the Wuhan lab research funded by Anthony Fauci and the National Institutes of Health.

Brand new merch now available! Get it at https://www.pjwshop.com/

In the age of mass Silicon Valley censorship It is crucial that we stay in touch. I need you to sign up for my free newsletter here. Support my sponsor – Turbo Force – a supercharged boost of clean energy without the comedown. Get early access, exclusive content and behind the scenes stuff by following me on Locals.